We are seeing a lot of good use out of the main body of Anklyo Zord. It has already been used for the Tricera Zord, and the Stego Zord. They change the color (of course), the top of the head, and the back piece. It is a really good way of going about reusing some of the zords, but not needing to run new tooling for the entire zord. That will save Bandai America some money in the long run.

It doesn’t feel like a reuse of the same figure over and over again. With the big color change, and the back pieces being so different, they feel like their own zord.

When the charger is placed in it’s mouth, the hammer is dropped. It can fight on it’s own, or it can team up with a Megazord and combine to have a massive punch.

It looks great on the Dino Charge Megazord Stego-Anklyo Formation. Of course if I had been thinking about it when I was making the formation, I should have switched out the Stego Zord, since in the show the Stego and Anklyo switch places for a Tri-Anklyo Formation.

The direction show that the hammer can be used as a weapon similar to the Stego Zord. I don’t think it works as well in execution, and was probably added on as a gimmick since Stego Zord can be wielded that way.

Overall a must have for the Dino Charge Collectors.Unlike the Deinosuchus Zord that I looked at last week, the Anklyo Zord is a part of the show, and not a toy only figure.  It was in the show, so you will want it in your collection. 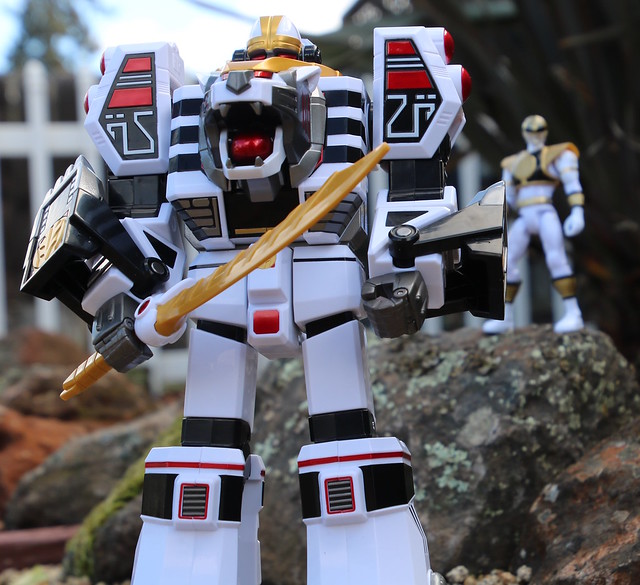 I have been watching this guy sit on the shelves of Toys R Us for a very long time. Finally this past week my local TRU put it on clearance. It was as if the stars had aligned just for me. Discounted from $79.99 to $39.99, and I had a $10 off reward, so I got it for $29.99 with tax. What a deal. The amazingly high prices of the past Power Rangers toys has really kept me out of that market, really only going back to Power Rangers Samurai, except for all of the Red Rangers being released a few years back. I have also been able to get my hands on a few of the MMPR Rangers as they have come out in the triangle boxes.

This is a great first foray into the original (U.S.) series. White Tigerzord is so strong and well made. It looks so accurate to the original from the show. I think the feet really win me over on this one. It seems that Super Sentai always gave their mecha robust legs and feet, and they really pulled it off here.

The paint is outstanding. From the great contrast of the white and black, to the touches of gold, silver and metallic red.

The transformation into Tiger Mode is fairly easy and straightforward.  It is clear that they did a great job over at Bandai getting him ready for multiple combinations.  There are unused moving parts all over this guy.

The only thing I don’t really like are the tiny back legs. It is hard to make something strong and robust when it comes out of another part of the body. 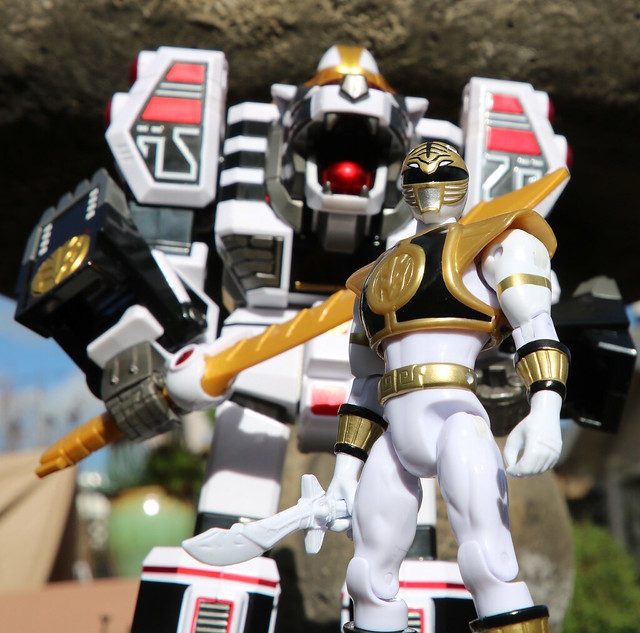