Well played Hasbro. Make the Civil War series the biggest in Marvel Legends history, and then do something like pair up the new War Machine with a much less impressive repaint.

In this case, if you are a Marvel Legends fan, you will definitely want to get your hands on War Machine. He is a much more robust and stronger looking version, since the previous movie version. There are a ton of accessories as well.

Rhody definitely has had some upgrades since he joined the Avengers. First off are the arm mounted machine guns. They fit on the hips, in a closed-up position. The clip flips out and then it is attached to the forearm. The clip easily falls off, so be careful with those small pieces.

On his back, he has storage for his club and shoulder mounted gatling gun. The club is closed up when in the port on his back. It can be switched out for an alternate version when held in hand, where it looks powered up and ready to hand out beatings. The gatling gun is the barrel that fits into the square hole on the shoulder. It can be replaced with an alternate version that swivels and moves up and down. It is a bit on the delicate side, and falls out easily too.

Finally, there are fists. War Machine comes with partially closed grasping hands. They work fine. There is an extra set of fists that work well with the arm guns. It is a nice touch. I would not have expected an extra set of hands, but I will take them.

Then there is the Mark 27 suit. A lot of people have been poopooing the Disco armor. It is accurate as far as the color goes. It was part of the “House Party Protocol” where Tony called on JARVIS to bring forth all of the suits in Iron Man 3 to attack the Extremis soldiers. Sadly, it didn’t make it long after the battle as Tony called for “Clean Slate” which destroyed all of the armors.

The Disco armor is very bright, with the right colors, including some really nice pearl blue paint. The problem I have with it is that it is a direct repaint of War Machine from Age of Ultron. It seems like with so many Iron Man molds to choose from, we should have gotten something a little closer to the Disco Armor. Looking at pictures of the Disco Armor, really, if we got a proper chest plate, we would have been pretty set. As it is, they painted a white circle over the rectangle arc port that we see from War Machine.

I am chalking this one up to a whole new mold, for War Machine, with a whole bunch of accessories. They wanted to do it right, it would probably be a one-off use, so they needed to two-pack it with something that will not be as expensive, as they only needed to do a different paint job. I get it.

Well, since it is a repaint of War Machine, they were nice enough to give us the turret for the shoulder, so that is something. Now, Mark 27 didn’t have any such gun, and had some pretty sweet fins that opened on his back, but I guess we can’t be too choosy. “Yes sir. Thank you sir. Please sir, may I have another?” 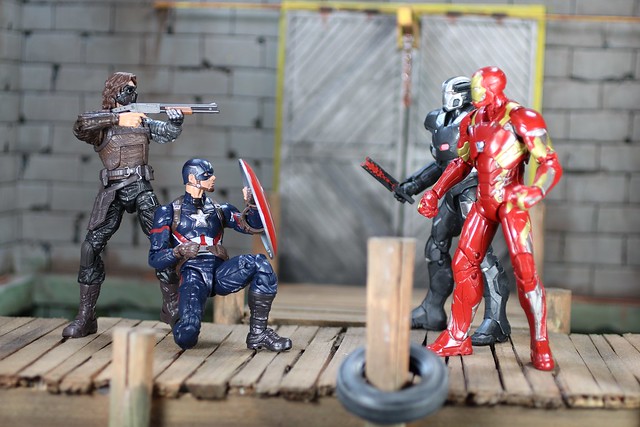 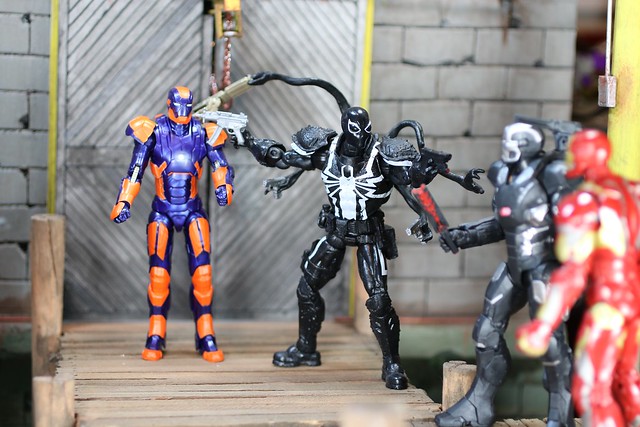 “You can’t bring armor into a battle after it is already destroyed. I am the Agent in charge of making sure the timeline stays in tact!”

Today we are looking at the final two figures in the Hulkbuster Wave.  Blizzard, and the big guy himself, Hulkbuster.

Blizzard is a character that is a bit below my radar. And rightfully so. He seems to be 3rd tier at best, but at least a part of Iron Man’s rogue gallery.

He is simply constructed. He has a special head, but the rest is done with paint. This is a great body that they use. It is very strong and has great muscle texture all over.

He has a menacing looking face, with angry eyebrows and no mouth. It would have been nice to get some sort of power burst with him to get something at least. It looks like he is standing around getting angry for the most part.

Hulkbuster is huge! I expected him to be heavy as I was buying the team and could feel heft, especially in the legs. He comes with two legs, two arms, a torso, a front and back piece for the chest, and a tiny little head.

He goes together easily for the most part. The head popped right on. The arms easily went onto the their holes. There was a bit of a need for some extra strength to get the legs onto their posts, but I managed. There is a post that sticks up out of the lower torso and attaches into the upper torso. Mine is stuck and does not swivel to the sides. I can get side to side movement, but no twist. So, as for now, my Hulkbuster is slightly off center.

Overall this is a great wave of figures. They give a good look across the board, and they have a fantastic build-a-figure on Hulkbuster. It will be a while before they live this one down. It is like the Sentinel back in the day. All other BAF figures were held to that standard, and it took a long time for some people to get over that one. Now we have the new standard, and the bar is set high!

Today we look at the Iron Men from the Hulkbuster Series. Well, hello there, War Machine we have already seen. Nothing new here. We saw it as Iron Patriot, featuring Col. James Rhodes, in the Iron Monger Series.

Same figure with the blaster on the shoulder. He is missing a bit of good articulation in the ankles, which makes it hard to pose.

He comes with an alternate head, with the mask up, so you can see Rhodes face. It is not the best face out there, but it works. I would love for Hasbro to figure out this dead eye problem.  We have seen it in the Star Wars figures too.  I had a really hard time getting the head to pop on.

I think with this version of War Machine, we are ready to start playing Civil War.

Um, Iron Man, you are tiny. Something went terribly wrong here. He is half a head shorter than War Machine.

This version of Iron Man is black and gold repaint of Iron Man 2. What we ended up with was fairly comic accurate, but overall, we have come a long way past these days. It is a fine figure for the shelf. Nice to see a black Iron Man amongst a shelf of red, but we have seen many better Iron Man figures in recent years.

He is a necessary figure to bulid Hulkbuster, and he looks fine on the shelf, but I don’t think he will be coming out to play very often.