We are continuing our look at the Sandman Wave of Marvel Legends. Over halfway done with this wave, so let’s not delay any longer.

Ah yes, a fan favorite. The Black Suit Spider-Man. Could this be when he was wearing the Venom Symbiote? Could be, but I am guessing not. We have had a lot of versions of Spider-Man so far, and this is yet another of the great suits. Besides his standard blue and red suit, this may come in second. Originally Black Cat gave him a copy of the Venom outfit (this time made of fabric). She thought it was very sexy. So of course Peter wore it. There were a few times it came out of retirement over the years. Each time was a troubling time for Peter, and it was reflected in the suit. 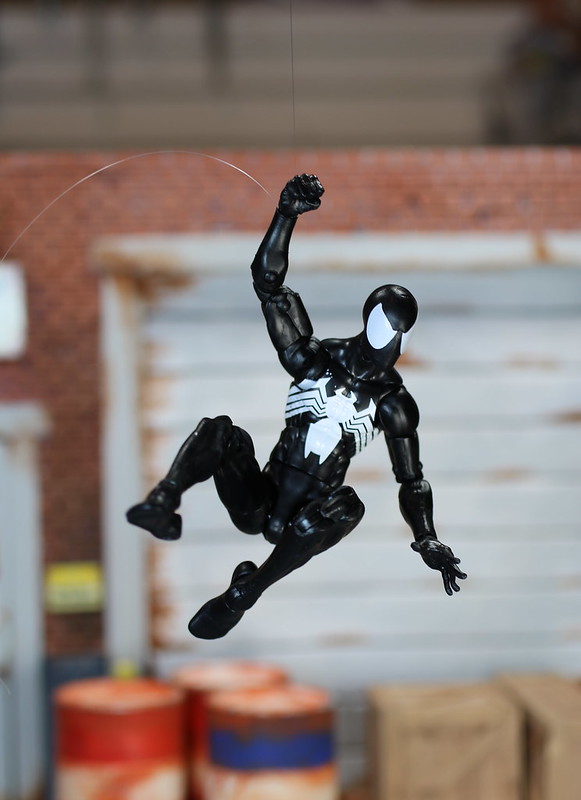 This is a very standard Spider-Man body. Once again relying on the paint to carry the naked buck with a new head. He has all of the great Spider-Man articulation that we know and love.

That is it for the Spider-Men for this wave. Three out of eight figures is enough I think. There are plenty more costumes we could see in the future. My hopes are on The Amazing Bag-Man where Peter wears a Fantastic 4 costume with a paper bag over his head. And of course a proper 6 inch Iron Spider.

The Jackal!?!? Who the *bleep* is The Jackal. Oh yeah, another crazy scientist that Peter has enraged somehow or another. This guy came around after Gwen Stacy died at the hands of Green Goblin. See there, a double tie in to both Spider-Man AND Green Goblin in one wave. It wasn’t bad enough that Peter blamed himself for the death of Gwen, but now there is a crazy guy that wants to make a Gwen Clone. In the midst of all of the mess-ups and failed experiments, he created Ben Reilly (the Scarlet Spider). Yay! Scarlet Spider reference. I don’t care what people say, I was riveted to the Clone Saga.

This Jackal is one freakish looking dude. Scantily clad in a pair of blue underwear, he is hairy all over. They did such a good job covering him with texture. He only has some dark paint on his chest, but the sculpting is so nicely done that it looks like there are many colors all over the body.

He has some fantastic musculature, especially on his back. He is a creepy addition to to this lineup. I am sure he is nobody’s favorite bad guy, but he sure does bring something different to the display shelf.