I just recently got out the Marvel Masterworks Amazing Spider-Man Volume 2.  And wouldn’t you know it, right there in The Amazing Spider-Man #15 is the first appearance of Kraven the Hunter.  Always one that is up for a good hunt, Kraven heads to New York to take down none other than Spider-Man himself.  Well, since we are some 700 issues later, I am sure it is not a spoiler to say that Spider-Man bested Kraven, and not for the last time.  He also teams up with Chameleon, which is pretty great since they share this wave together.

Since this wave features the Scarlet Spider, rather than a regular Spider-Man, I went to the shelf to get out my First Appearance Spider-Man from way back in 2005, when the Marvel Legends were being made by Toy Biz.   It seemed rather fitting to have Kraven be up against the early costume. 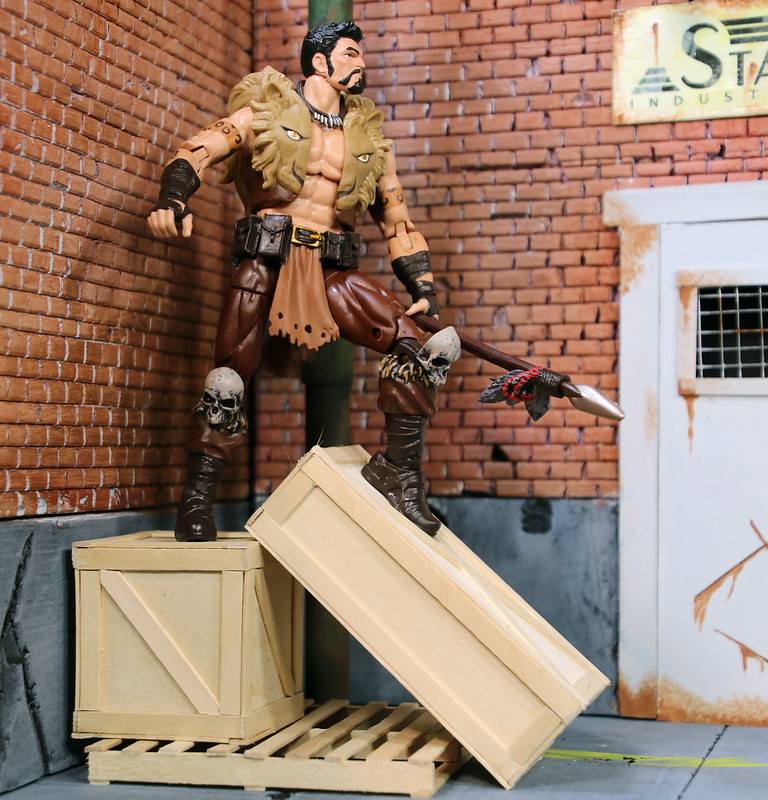 “I’m coming for you little spider.”

Kraven looks amazing in his consistently over-the-top hunting outfit.  He comes with his spear, and he really doesn’t need anything else.  A net would have been nice. 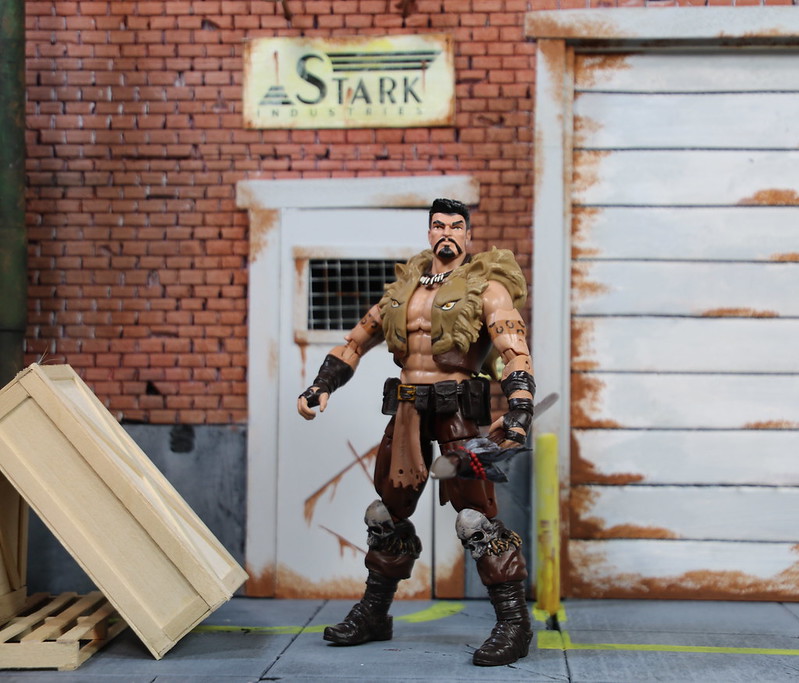 “Where could that Spider-Man have gotten to?”

He has all of the great articulation that we know and love from this line. 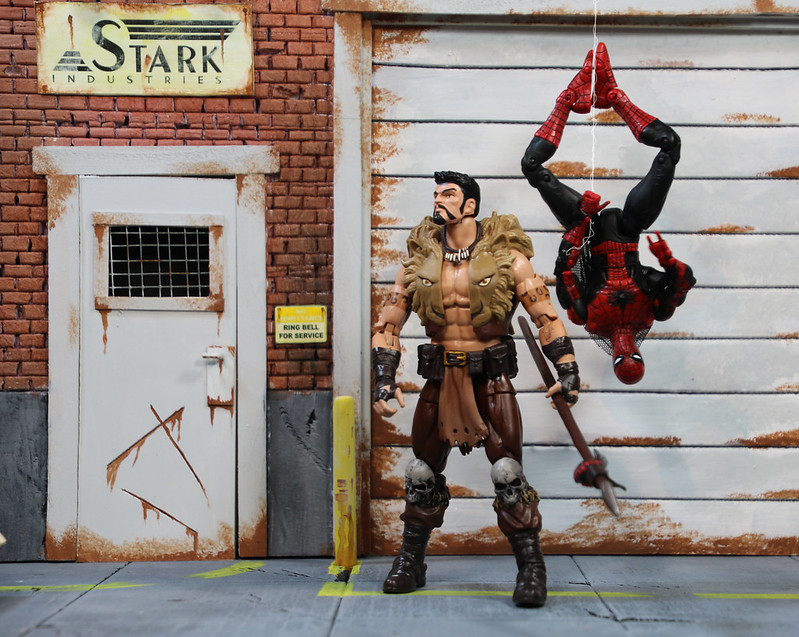 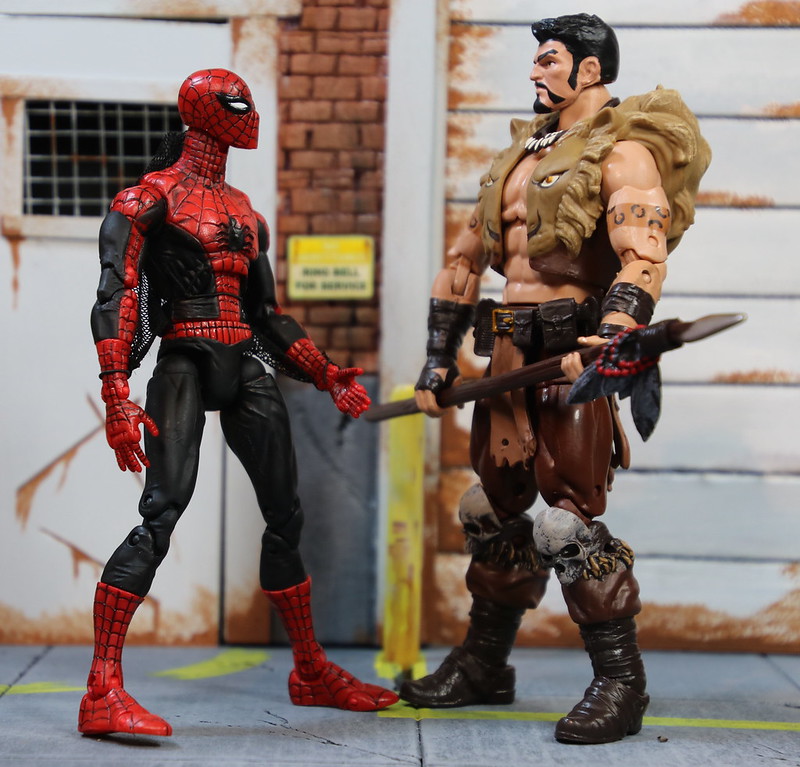 There are so many details on his clothing that really help him to stand out on the shelf.  The vest is rubber, and didn’t really interfere with any of the articulation.  It helps that it is open in the front.  The skulls on his knees have some of the best details on his entire body, and that is saying a lot.  He is covered in details. 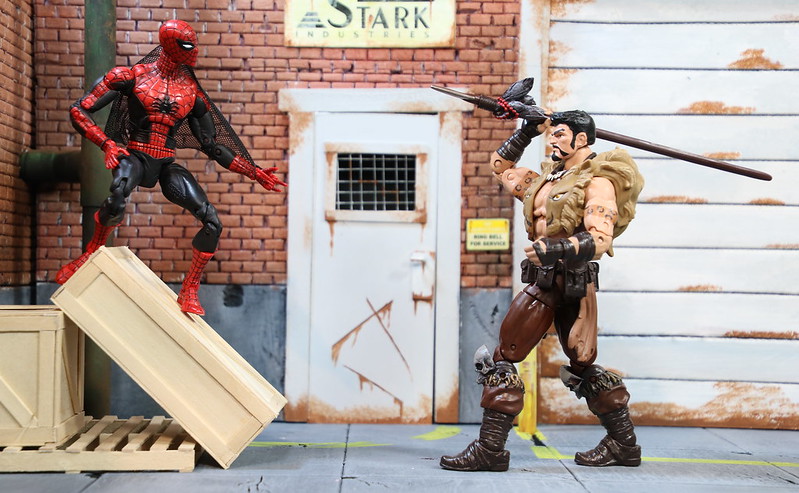 “Watch were you point that thing, Kraven! You will shoot your eye out!”

Where do you think Kraven would have mounted Spider-Man if he had bested him way back in 1964?  Head on the wall? 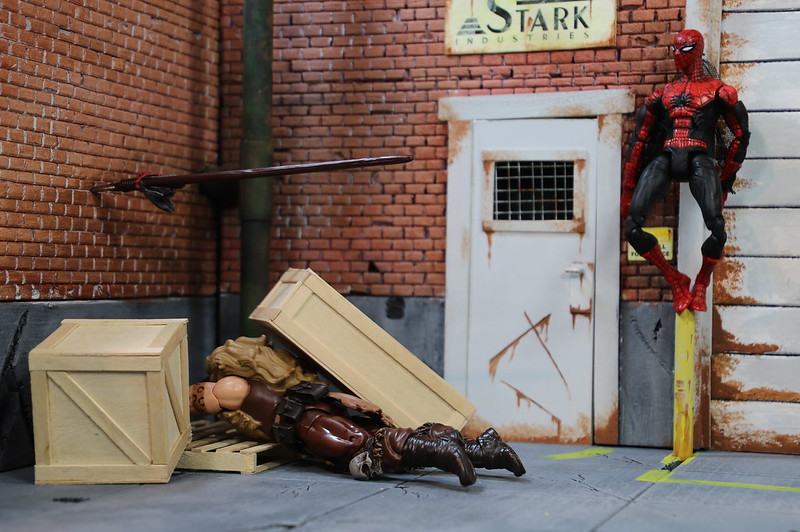 “Lucky those boxes were there to break your fall.”

You can bring all of the tools you want to a fight, but it will be hard to beat the natural talent of Spider-Man.  Kraven was a fantastic first figure to open in this new Rhino Series of figures.  He is not heavy in the accessories, but he has that great look about him.  All of his lines are crisp and clean.  There was a little bleeding around the forehead from the black hair, but easily overlooked when all else was done so well. 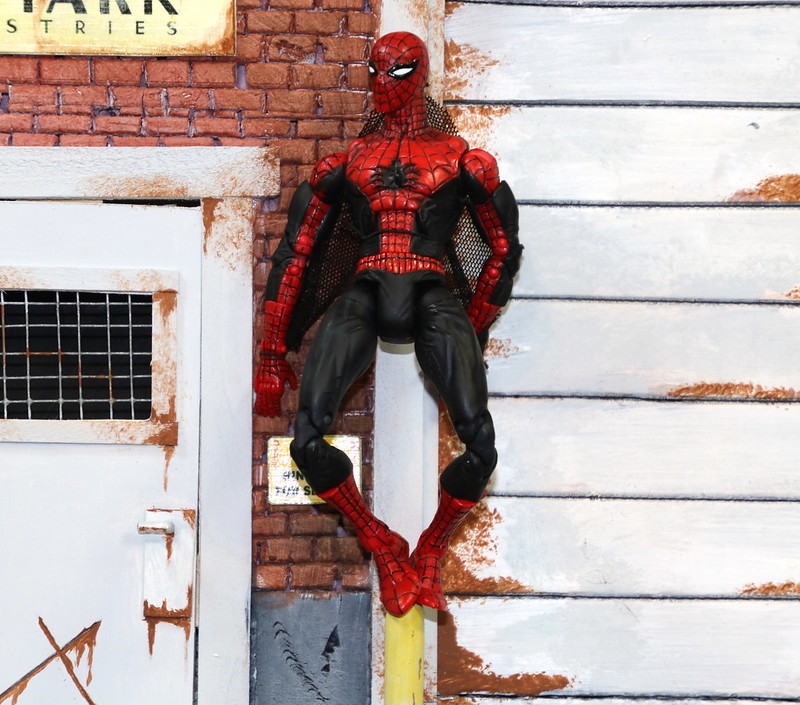 I had to post a second shot of Spider-Man here.  Getting him to balance on that post was some amazing feat.  The post is not wide enough for one foot, and I was able to get him to stand there free-form.  I didn’t want to have to mount him there somehow.

5 figures and a Green Goblin without a head.   Pretty close to getting this done.  I am going to be bummed if I cannot find that last part.

Extra hands, and an alternate head.   A lot more extras than we usually see with the Marvel Legends figures.   I like this figure a lot more than I thought I would.  The details are nice and clean on his body.  The two heads are a nice touch, as well as being able to choose which hands to put on.   That is nice for people who like to pose their figures.

Spider-Man figures have been hit and miss in the past.  Either they are really good, or they are so-so.  This one is about 90% really good.   I have to say, I like all of him, except the hips.   They look pretty bad for display purposes.   They do however work really good for giving SM some dynamic poses.  Throw in the web-hands, and he gets even better.   The multi-joint shoulders are a neat touch.

What can I say, I am a sucker for a ponytail.   That being said, this is the girl I found that came with the Green Goblin torso.  If I found Black Cat, I would probably have been just as happy.  Spider-Girl is a fine figure.   She moves well, and they didn’t make her too skinny.  And where it counts the most, they didn’t give her a manish face.

Ultimate Beetle is one strange looking dude.  And I like it.   He looks so much different than the other Marvel figures I have on my shelf.  He looks like he should be hanging out on the DC side.  The silver and red look so great together.  I was really happy he was the guy on the peg, and not Boomerang.  I think Beetle looks so much more fun.

Dark.  First thought on Superior SM.   He comes with two sets of hands, the web pose hands and something that looks like it should be gripping a gun.  I am thinking maybe to swing on the web, but they are pretty wide open.

All five, and a Headless Ultimate Green Goblin:

Someday, I will be able to get the last figure and finish off Green Goblin’s head.  Until then, I have a pretty fun set of Spider-Man figures. Some movie based, and some comic based, but all a good find.  I am really happy with what they have done with the Marvel Legends line.  It makes me excited to keep looking for Captain America, as well as get ready for The Guardians.

The movie turned out to be great.  I was hoping it was, and ended up with the Toys R Us wave of Marvel MiniMates featuring The Amazing Spider-Man.

That’s what we need right?  Another Spider-Man.  Add in Battle-Damaged SM, Peter, and Vigilante SM, and we get 4 new Spider-Man figures this time around.  These are really nice figures.   They have great details. It is fun to look back at the really early Spider-Man figure, and see just how far the MiniMates lines have come, featuring some really great paint, and they are very accurate.   The Battle-Damaged Spider-Man actually has the scratches across his chest from his battle with Lizard.   Oops, did I give that away for you?  Of course not.  You knew that SM and Lizard had to mix it up at some point.

All right, down to the figures in pairs.

Pretty standard for a Spider-Man figure.  He comes with the removable mask, his hair to replace the mask, and his backpack. A backpack?  Well, yeah.  The backpack actually makes a few appearances in the movie.   Torn to shreds by this time, Spider-Man will need to hone his sewing skills to get this suit back into shape.

As for Lizard, he looks great.  He has the big chest plate to give him some extra muscle on the upper part of the body.   He has the great reptilian legs.  Don’t forget the tail, which does have some slight movement, but best is that the tip comes off.  See the movie.  You will appreciate this part.   The paint is fantastic.   His face looks just like the movie version.   I won’t say the movie face is the best Reptile face they could have done, but since this is a movie figure, Art Asylum did a fantastic job matching the face to the movie.

This was an interesting choice for them to put together.  Peter and SM in the same pack.  This is one of the best Peter’s made to date.  His clothes are great.  He comes with his backpack and a skateboard.   This is an all new skateboard.  For you Back to the Future MiniMate fans, this is not Marty’s skateboard.  I checked.  😉

Spider-Man is in all his clean and ready to lay the beatdown glory.   A really nice figure.  We get an alternate head for Peter, to use with the costume.  No glasses on this one.

“Who do I look like, the mayor of Tokyo?”  Best line of the movie.   Captain Stacy Rocked.  His figure is just what you want with a MiniMate.   The figure looks really close to Denis Leary.  He comes dressed in is uniform.  They gave him tactical gear, as well as a handgun and a machine gun.  I would have liked to see him with a shotgun since that is what he had in the big battle at the end of the movie.

I think they were kinda hurting for characters in the Toys R Us Exclusive sets, and the best we got was Vigilante Spider-Man.   Not really all that important, and not really the best character in the set.  He does have a beanie, which we do not see too often in MiniMates.  Change the head and you have a nice Luke Cage figure.

Gwen looks awesome… as she should.  A major part of the comic Peter’s life, it is good to see her represented as such in the first movie of the new franchise.  Hair up, or hair down?  You choose.  She comes equipped with the ponytail, but she comes with a second hairdo that allows for her flowing blond locks to hand around her shoulders.   Don’t like the jacket?  That’s okay, because she comes with a second set of arms that allows for her to be in her shirt.  She does not look that much different from the MiniMate that was made from the last movie’s version of Gwen, but come on this Gwen was just better.  I am sure Bryce Dallas Howard could have done a fine job with Gwen, but she was not given much to work with.  Emma Stone was given the better Gwen.

Dr. Connors.   Art Asylum cheaped out on this one.  They have him the arm we already have, with the sleeve wrapped up.  In the movie, Dr. Connors let everyone see his mangled stump, as more of a reminder to himself as to what he was trying to accomplish.  He does have OSCORP on his jacket, which is a nice touch.

In all, a very nice collection of 8 figures.   These are the available figures from Toys R Us.  There are two other sets that were sent out to Comic Stores.  They include Uncle Ben and Aunt May, each with a SWAT figure.