We are going to take a quick look at a few multi-packs that came out a few years ago.  I was not able to find them initially, but they were available in the secondary market (Amazon) for great deals.   They have been sitting on the floor way too long, and wanted to be let free to play.

This is the Amazon.com exclusive set from Age of Ultron. It contains a really large new mold of Thor, a retool of Black Widow, a new tool of Bruce Banner, and a retool of non-Legends Hawkeye. The set is okay. I really wanted to get my hands on a decent movie Thor, and of course the Bruce Banner. We have had Hulk, but this is the first time we get Bruce.

Black Widow is a fine figure. The colors on her outfit are kind of fun. They are not very movie accurate. She comes with a set of batons to break some bad guy heads. Hawkeye is the weakest of the set. It is clear that he was not a part of the Marvel Legends line originally. His face seems a bit smooshed, and the rest of his proportions are way off too. Not what we are used to with the Marvel Legends movie figures.

This is a fun set of great characters. We get Agent Coulson carrying his really big gun. He comes with two heads, the alternate head wearing sunglasses. They did a great job of capturing the likeness of Clark Gregg.
The second figure is Nick Fury. He comes clad in his black outfit and black trenchcoat. He comes with two handguns that have working holsters, one on the hip, and one on the chest. Then there is Maria Hill. She uses the Agent 13 body with a new head sculpt.

This is a great set to fill out some of the non-super powered characters in the MCU.

This set, I found for a good deal on Amazon I think. It was a super sale, and I could not miss getting my hands on Ms. Marvel. And she does not disappoint.
She comes with Captain America, who I think is a reused version. And then there is Radioactive Man. We can’t have too many bad guys, and to have one that is opaque and glowing is pretty fun.

Today we are going to look at the Agents of S.H.I.E.L.D. ladies that share the packaging and name.

Bobbi Morse is one of my favorite characters from Agents of S.H.I.E.L.D., so when I saw we were getting a Mockingbird figure in Marvel Legends, I was super excited. And this figure does not disappoint. 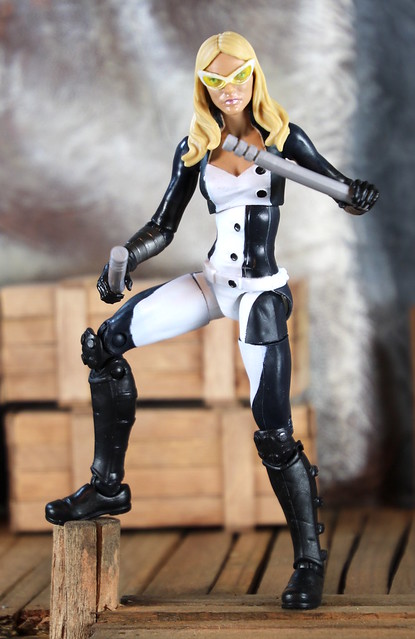 She has on her classic black and white color scheme with a newer design for the outfit overall. She has the buttons down the front that give an interesting look. She is wearing glasses with a yellow tint. They are removable, and she looks good without them too. Down on her legs, she has on knee pads and shin guards. Something I am sure she is happy to wear. Nothing like going undercover to a ball and having your legs look like they were in a battle hours before. 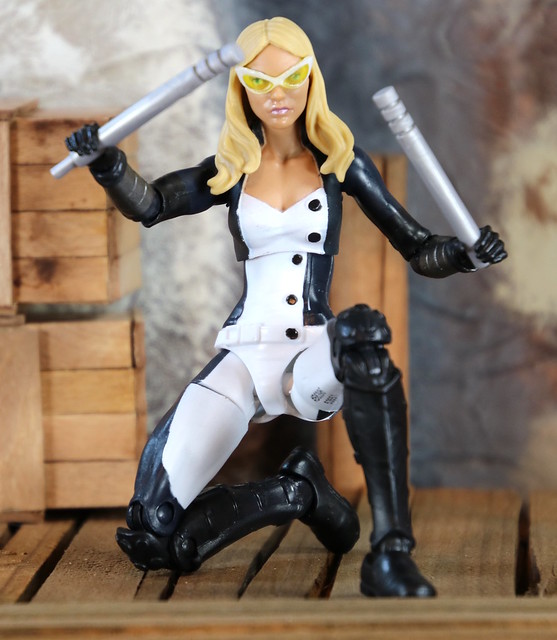 She has great articulation overall. I was happy to see that she has some head movement despite having long hair. I would love to see Hasbro give us the double jointed elbows we see on the male figures. The single joint is just a little hindering to get some poses going.

She has nice wide feet with her boots. Something we will see is a problem with Agent 13.

Sharon Carter is almost a good figure. They unfortunately went with the tiny female body that hints at being great, but lacks something. We used to get female Marvel figures that were waify and way too skinny. We have seen great examples of females with stronger bodies without taking away the femininity of the figure. Mockingbird is a great example of that. 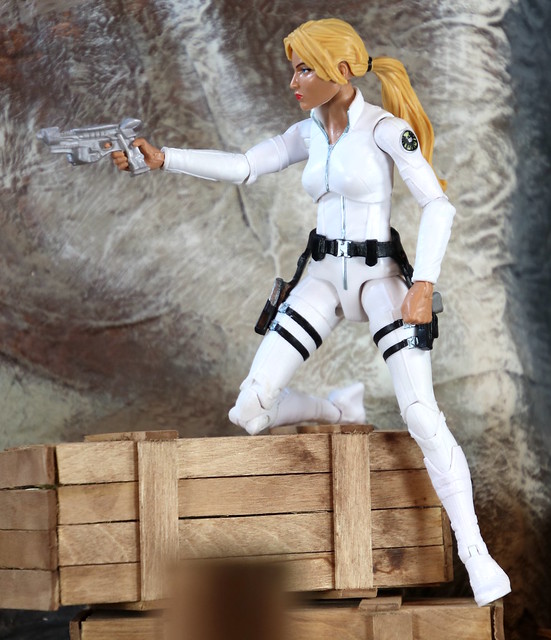 With Agent 13, she is very skinny, she is a bit limited. Mostly, since she is skinny, she is using the lower limbs I hate. The legs are well designed, and look good, but they are paired with the high-heeled boot that not only looks wrong, it creates a tiny footprint for the figure to stand on, which makes it impossible to get some poses. 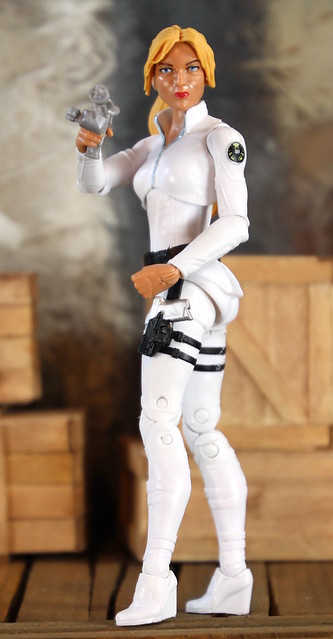 She is wearing all white. She does have some detailing paint applied. She has a silver zipper and her belt and holsters are black and silver. She has two guns in her holsters, but they are molded into place, which really stinks. To go along with that, she has a really weird looking gun. They could have given her open holsters and a pair of handguns, and it would have made a ton of difference. 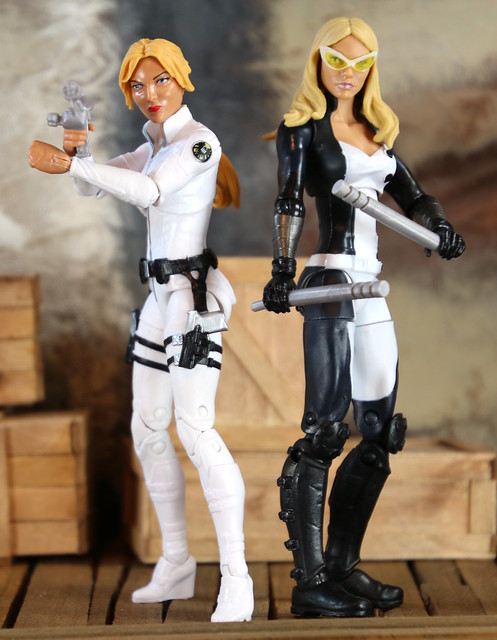 When the two “Agents of S.H.I.E.L.D.” are standing together, it is clear why they went with two different body types.  There is no confusing these two ladies.   They are very different, and look like they have quite different jobs within S.H.I.E.L.D. 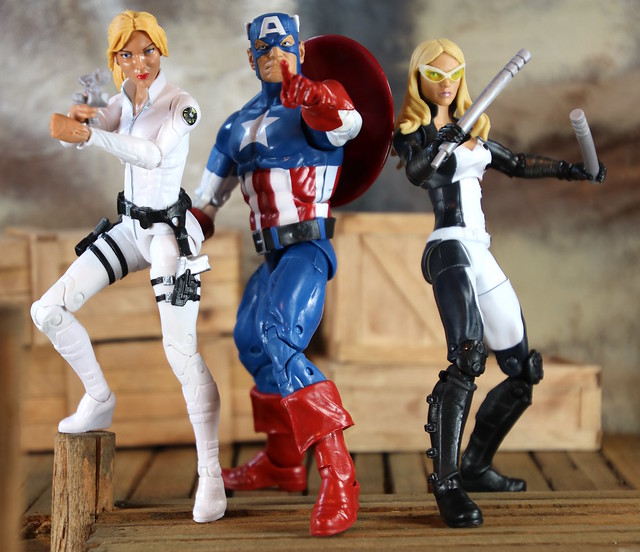 This is becoming a formidable team.  Next up are the bad guys.  Cap and the ladies might need a little help going up against this team of foes.

The ToQ Buckle is probably the least fun live action accessory of the ToQger line. It is a simple buckle that has a center part that clips in and out. The reason I got it was, similar to most anyone who got the ToQ Buckle, for the Shield Ressha.

The ToQ Buckle will make a good display piece that will show off the team buckle and make a nice centerpiece for all of the Ressha, but that is about all.

The Shield Ressha is what this whole set is about.   It can be used in blaster, changer, and as an auxiliary arm for both ToQ-Oh and Diesel-Oh.

The Shield Ressha was used many times in the show, so it is a must have for ToQger collectors.   It splits in half down the middle to the midpoint of the train.

Add a little offense to the defense with a team-up of the Police and Shield Resshas.  The Shield is a powerful defensive weapon for the team.

It has stop lights inside that are the colors of the ToQgers.