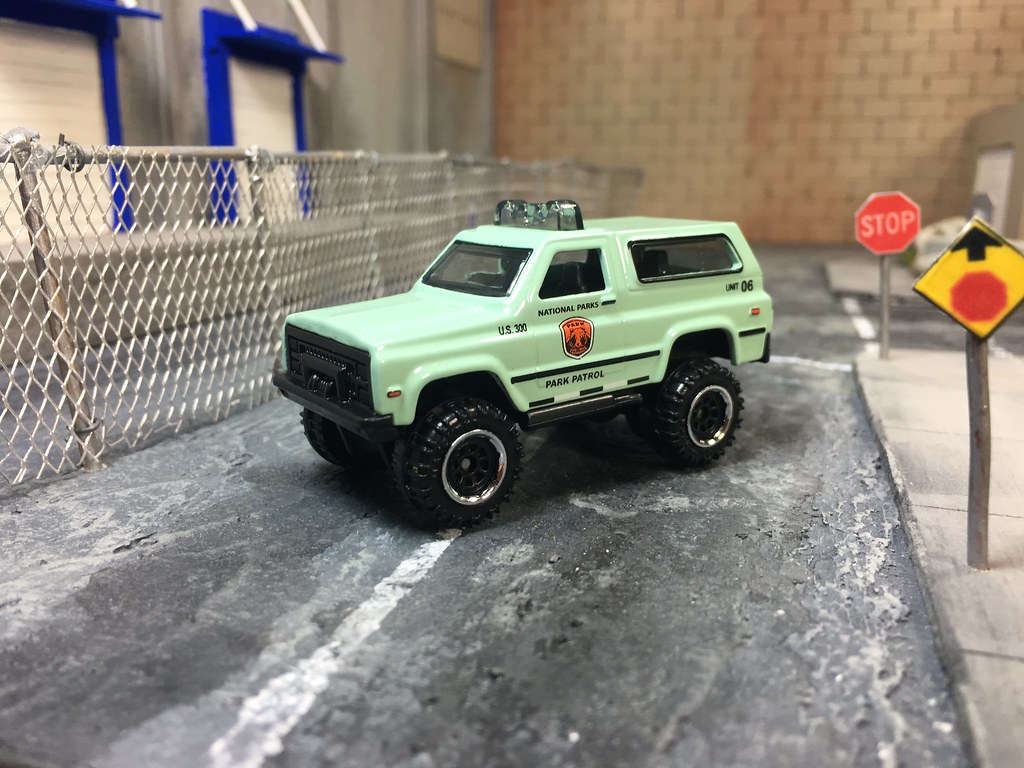 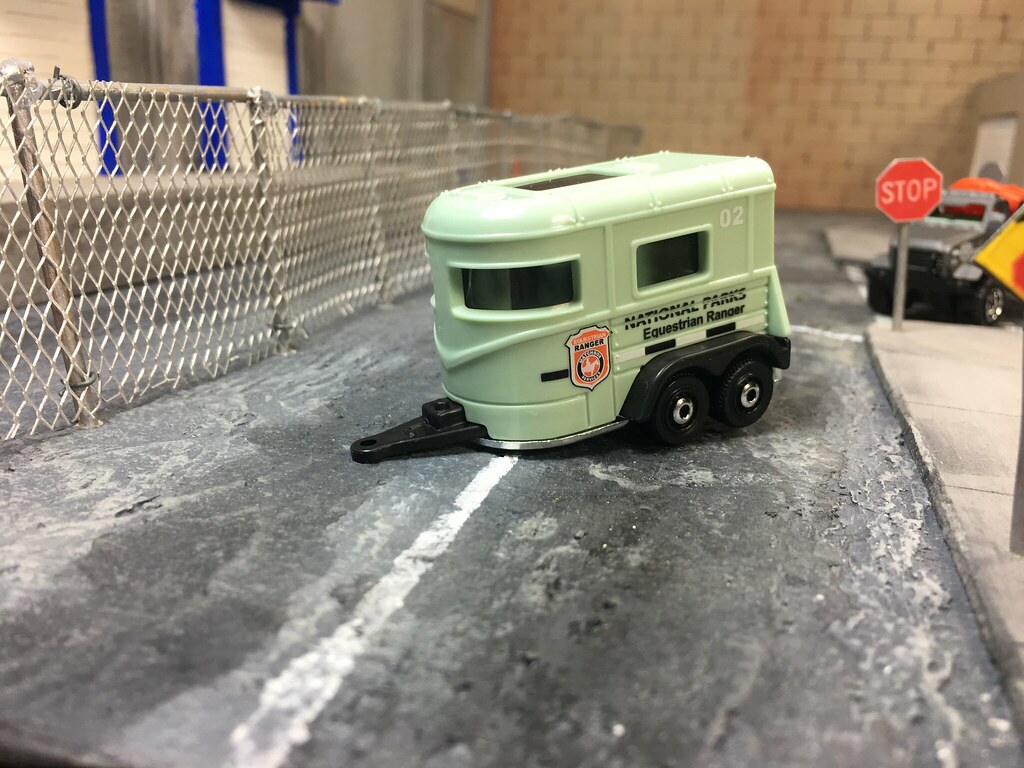 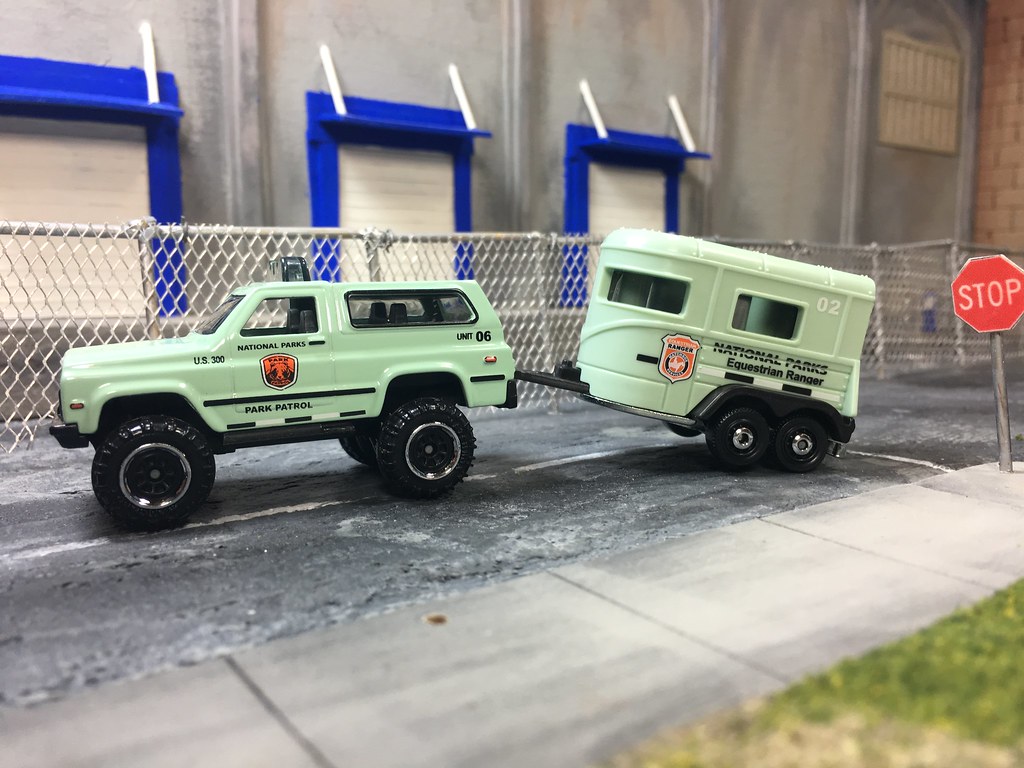 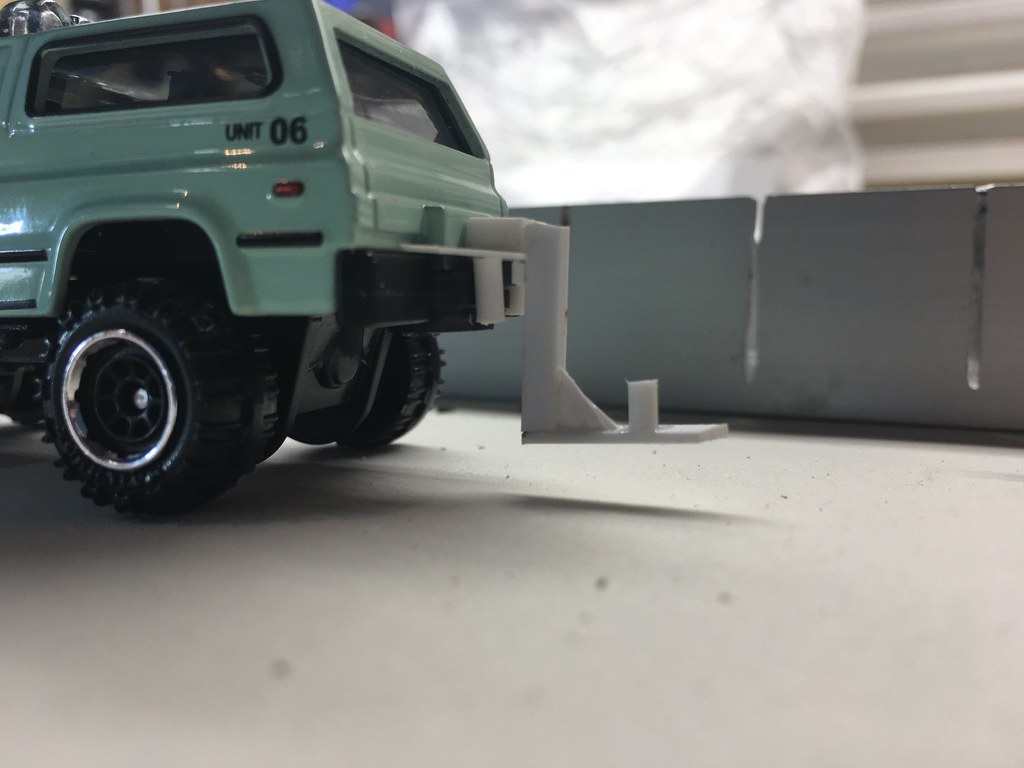 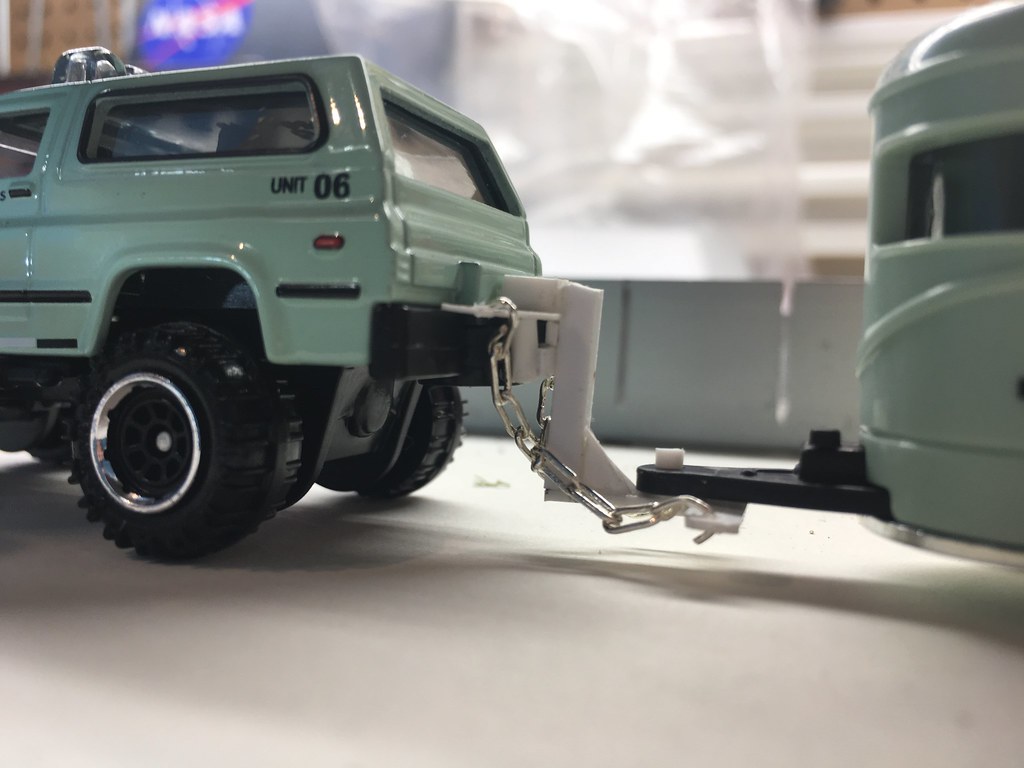 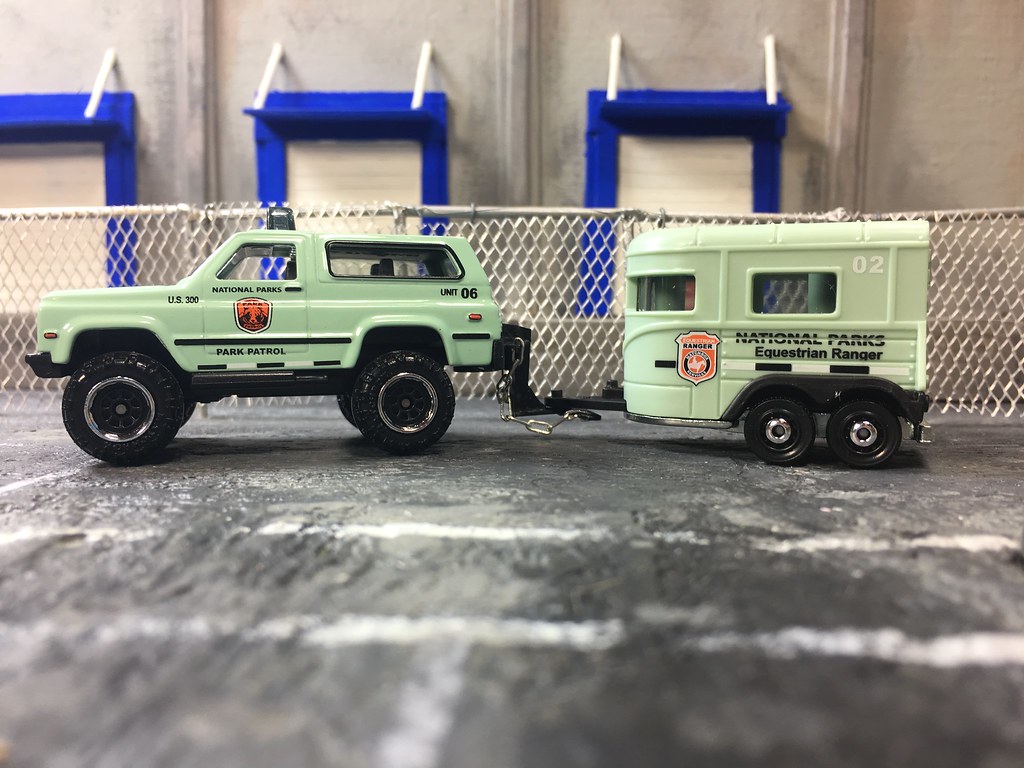 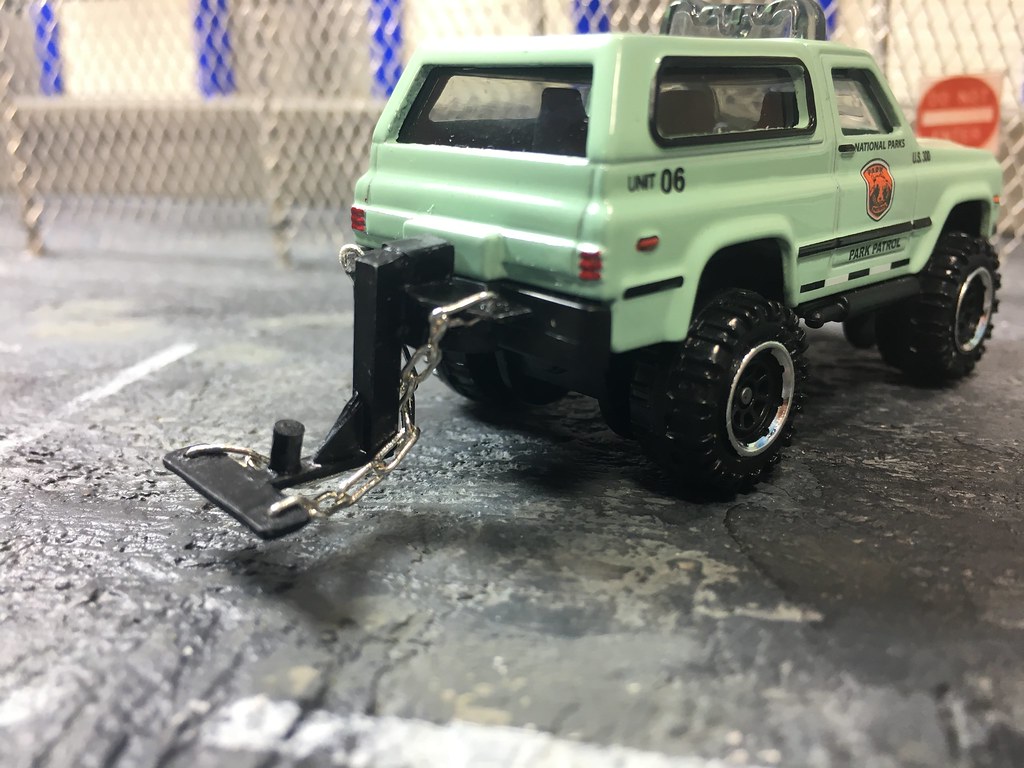 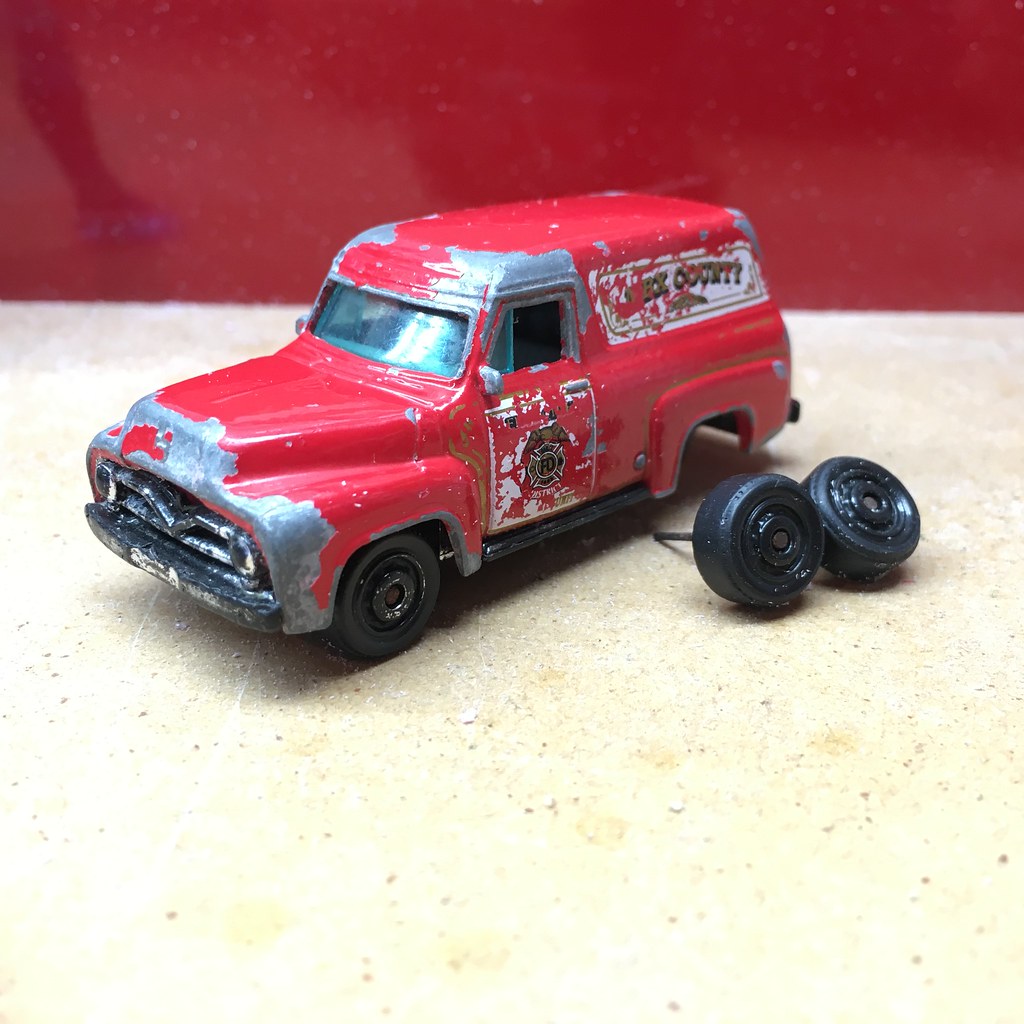 This 1955 Ford F-100 Panel Delivery by Matchbox is a car well loved at my wife’s library. After storytime on Fridays, the kids get to bring out the toys. Diecast cars are always a favorite, and she says the more unique cars get the most love.

This truck showed up a few years back, went into the lost and found for a time, and then went into the box with the rest of the diecast for the kids to play with.

Yesterday a kid brought it up with the back axle split in two. My wife said, “I think my husband can fix that.” I have become known as Uncle Toy Doctor after fixing my nephew’s powered toy truck. 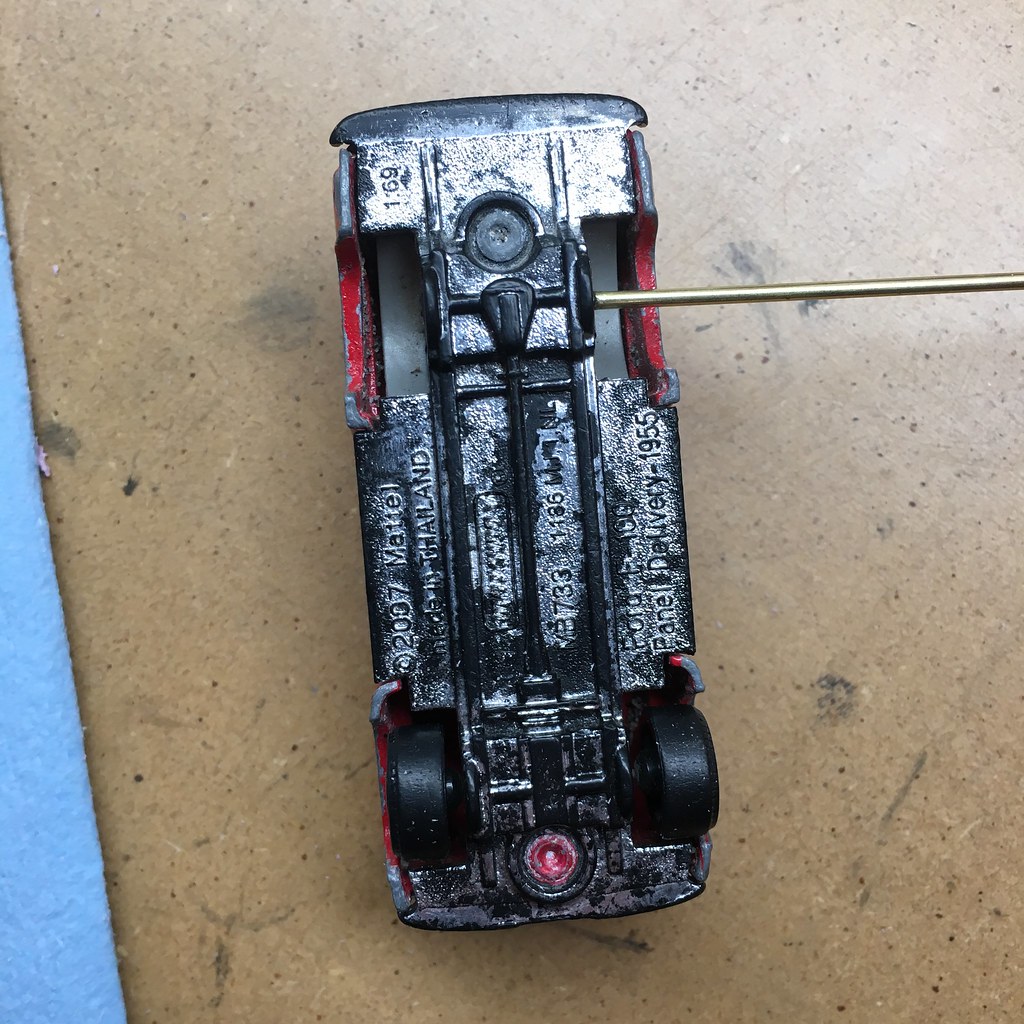 I have played around with diecast in the past, and I have a list of projects I want to do. Most of what I have done did not require work on the chassis. Well, this one was going to require something special.

Not only had the axle broken in half, but the wheels were fused to the axle, so if I glued them in place, the wheels would not spin, and that is a no-go when this is meant to be played with. 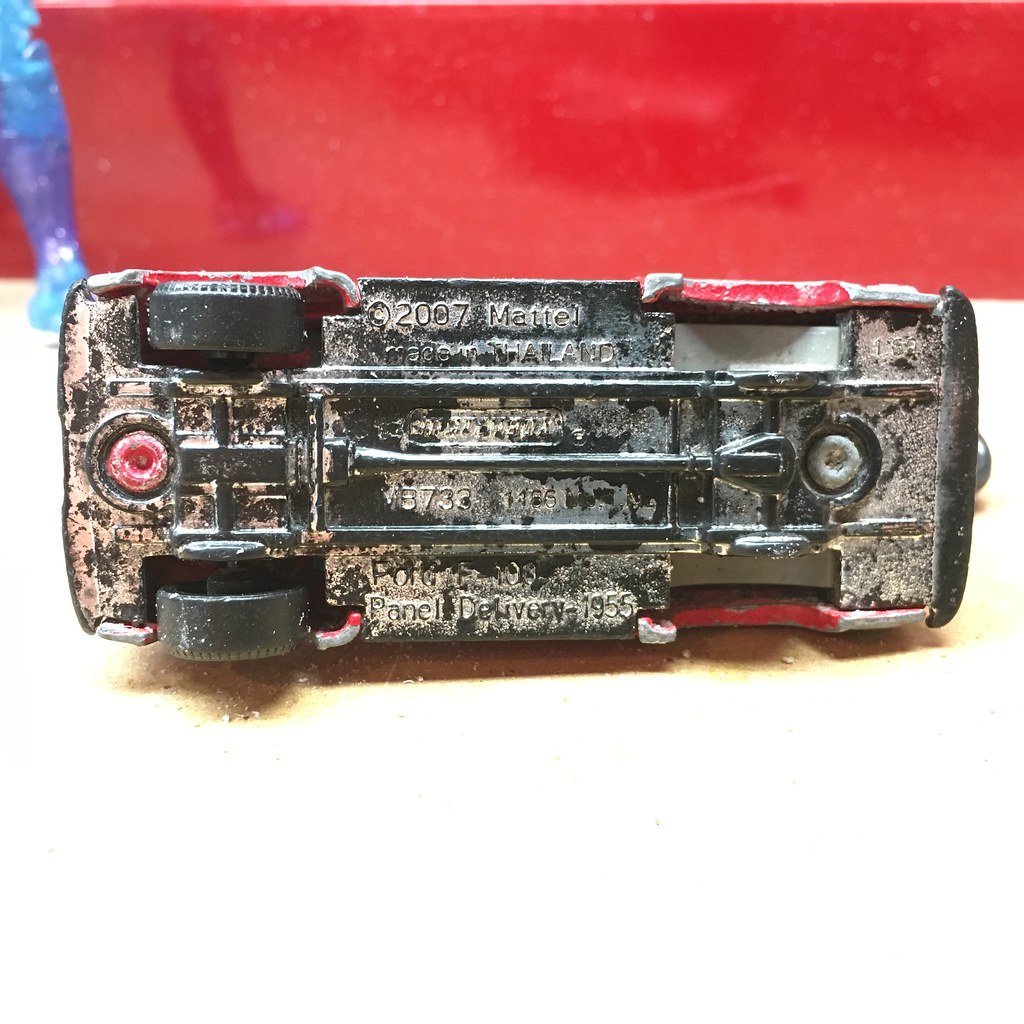 I had bought some brass tube to allow for new axles, but had not tried it yet. I had only read about it. Well, this was the perfect opportunity. I cut out the other axle, and drilled out the hole for the axle to accept the bigger size brass tube. I glued it into place, cut it to size, and I was half way home. 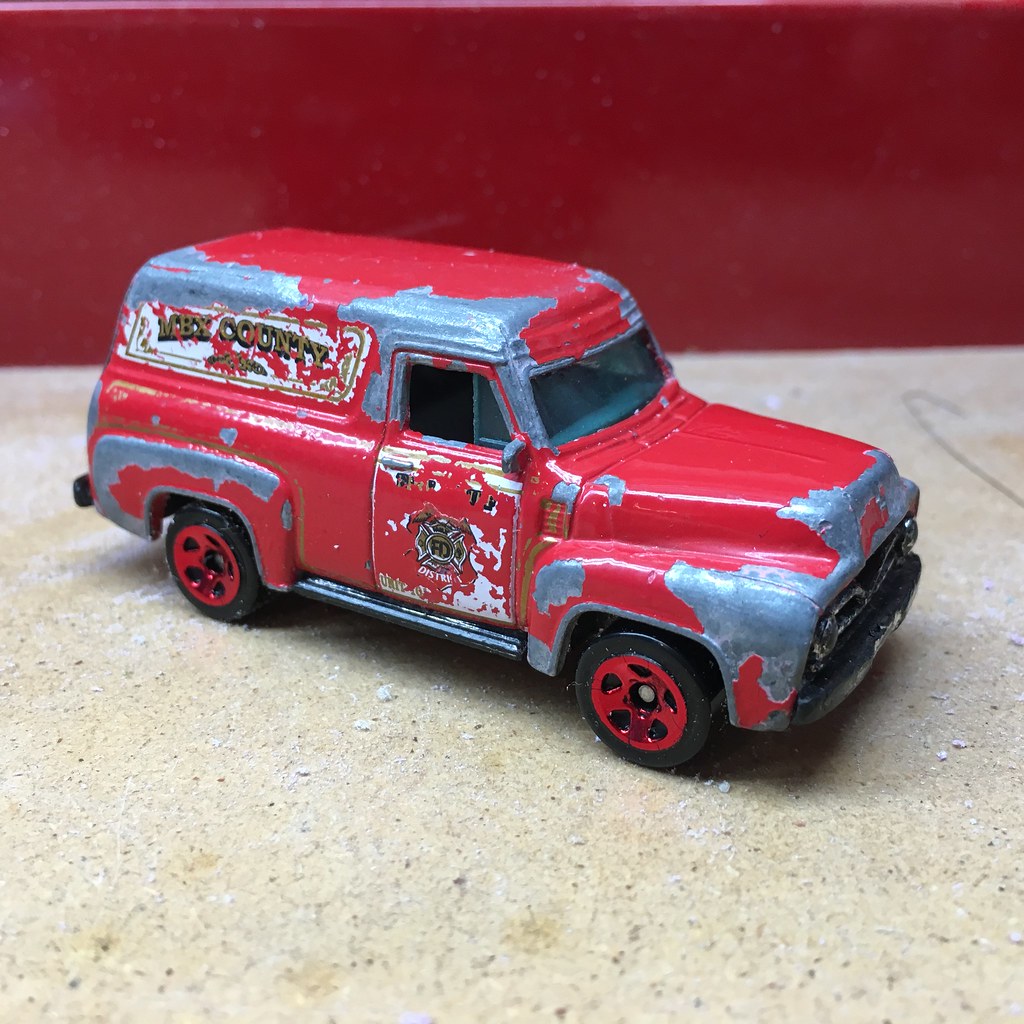 I thought it would be fun to use a pair of wheels off of a Brush Fire Truck. Unfortunately, with about a millimeter of size difference, that was all that the wheel needed to not be able to fit. Boo! Okay, on to plan 2. Find any set of wheels that fits. All of the donor cars I had laying around, I have plans for and need the wheels in tact, or they were just too big. Then I found wheels to the Hot Wheels Back Slider. This thing has a big set of dual back wheels that were smaller than usual. And that smaller size was perfect to fit in the wheel wells of this truck. And being red, it made this truck look more like a sleeper anyway. It must be a hot rod under the patina.

All glued into place, and ready to go back into service. I would love to have added it to my collection, with the perfect patina to the paint, but it is important for the kids to have the wide variety of cars to play with. Really, this project wet my appetite to really get going on one of my own projects and see what I can come up with soon.

A long time in the making. I have 2 dioramas for 6 inch figures, and one more for Transformers. What I was missing was something in the 1/64 scale range to take proper pictures of diecast cars. The work is over. Time for photo fun. 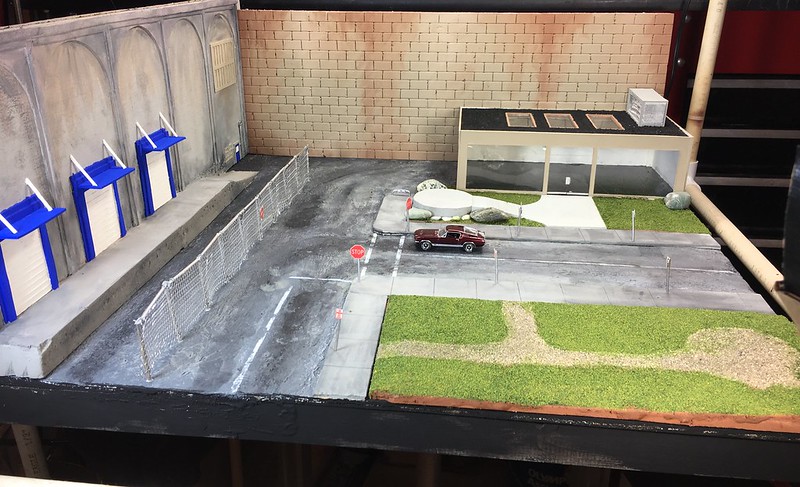 The diorama is set on two walls. The left wall is a receiving dock for a warehouse. The idea behind this was to have a place that looked industrial with lots of concrete. I made to dock wide enough for a standard 1/64 scale vehicle for when a chase scene happens. I added a fence in the front for some texture to the pictures. 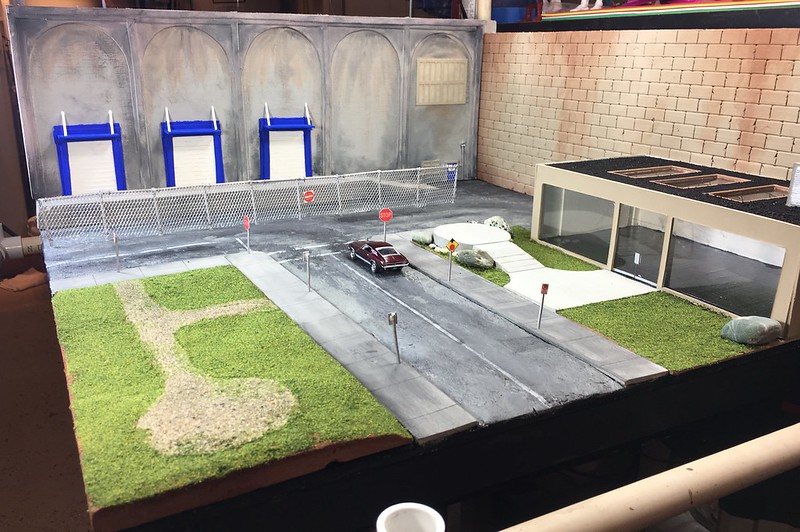 The back wall is a large block wall. It is intentionally a different material than the warehouse wall so the two buildings look like they are together but not the same building. I wanted to be able to add different textures to this wall, and a different color scheme. 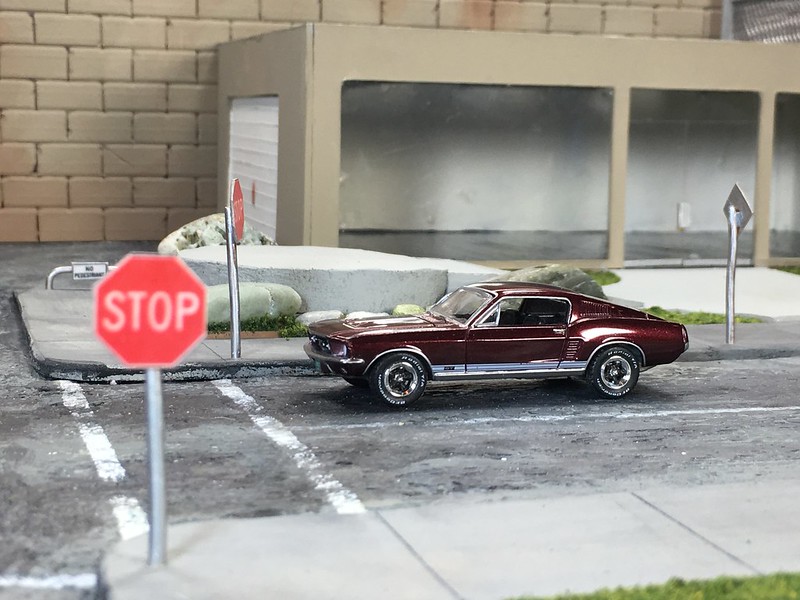 Down in front of the block wall is a new car dealership. There are skylights on the removable roof, as well as big front windows to display the cars. There is a concrete display in the front to show off the newest delivery. I am planning to add a sign for the dealership. I am working on a way to make the sign changeable, so I can create different looks depending on what cars are on display in the showroom. 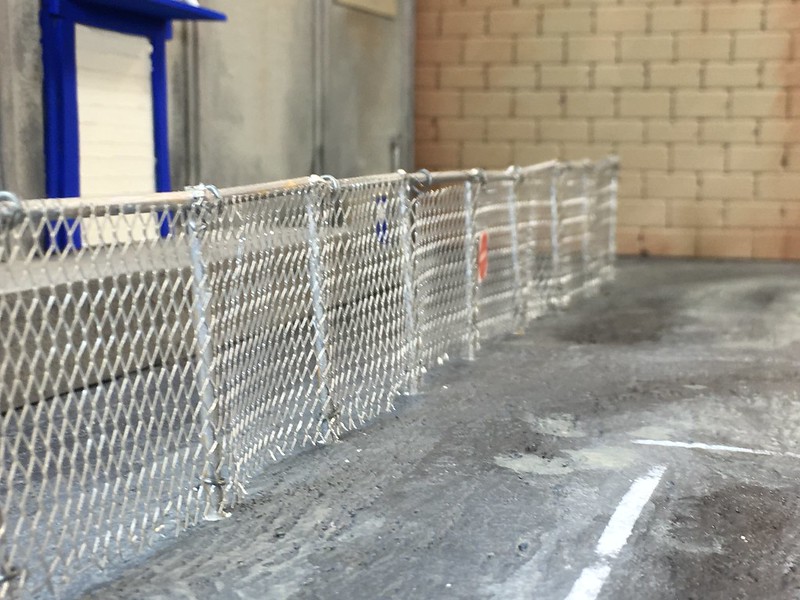 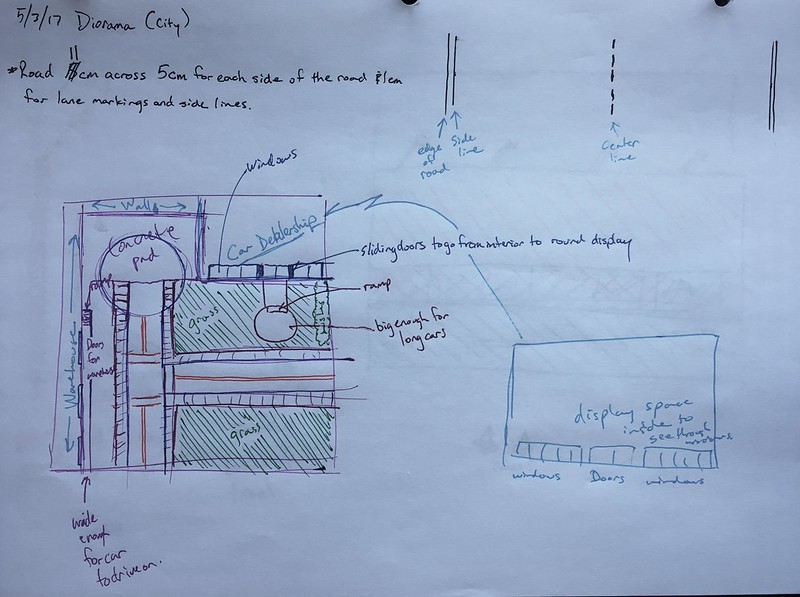 design drawing with scale for roads. 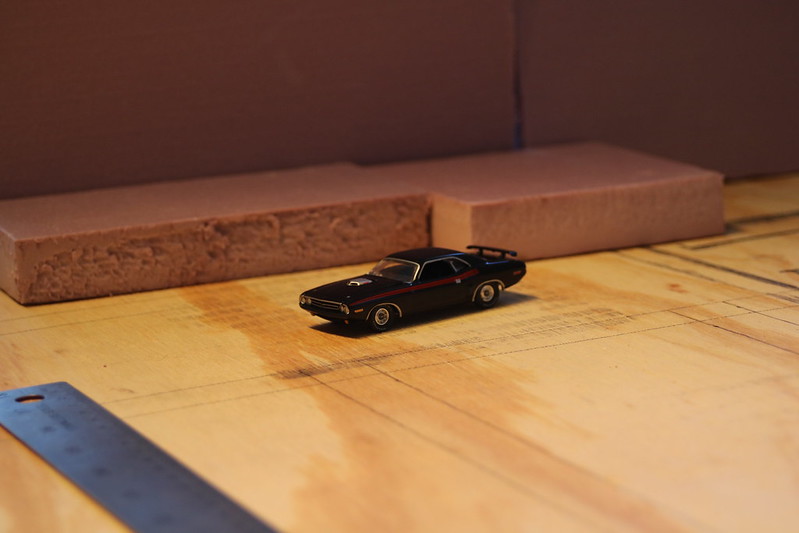 Trying to figure out the size for the loading dock. I used pink insulation foam for the big walls. 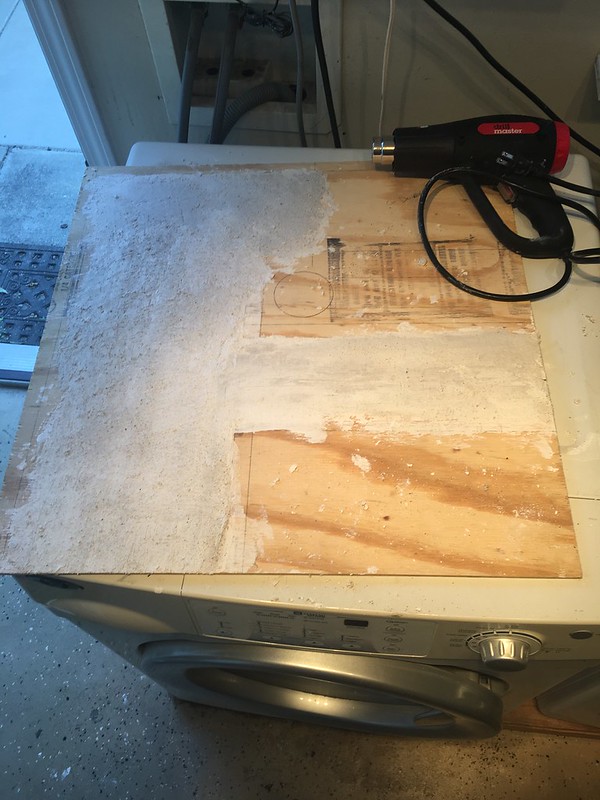 The road was made with plaster of paris to give a used look. There is a new car dealership, but it is in an old industrial part of town. 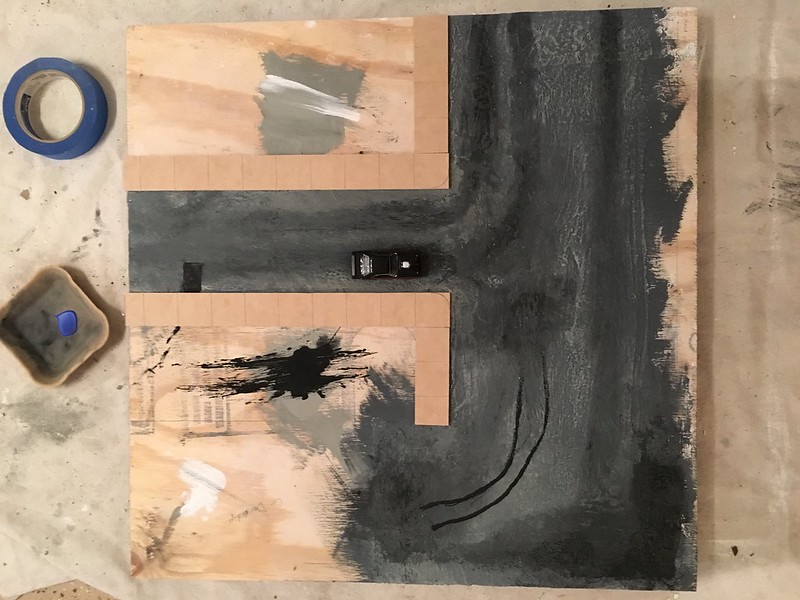 The road is painted and the sidewalks are being made. I used pressboard for the sidewalks. It was hard to find a material that was tall enough to be a curb. 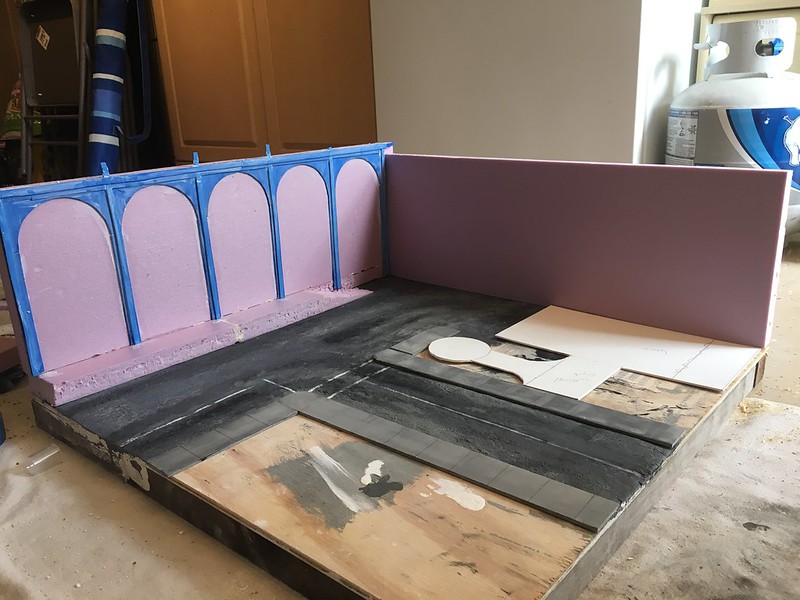 The warehouse is getting some art deco style design work to make that massive wall more interesting. I used sheets of soft art foam for the details. Once in place, it all got a coat of Modge Podge to make sure it was nice and strong. 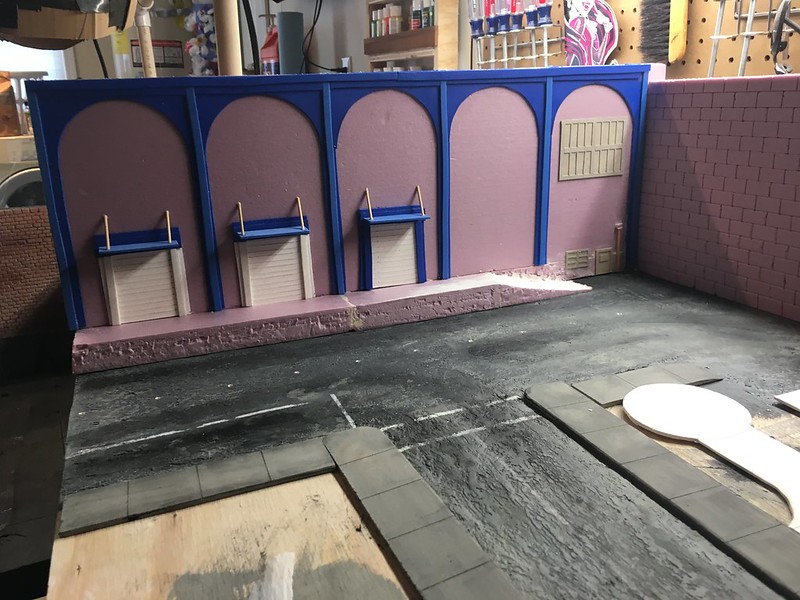 Next up were the warehouse doors. I also added windows and a door to the far right side. The back wall has the blocks scribed into the foam. 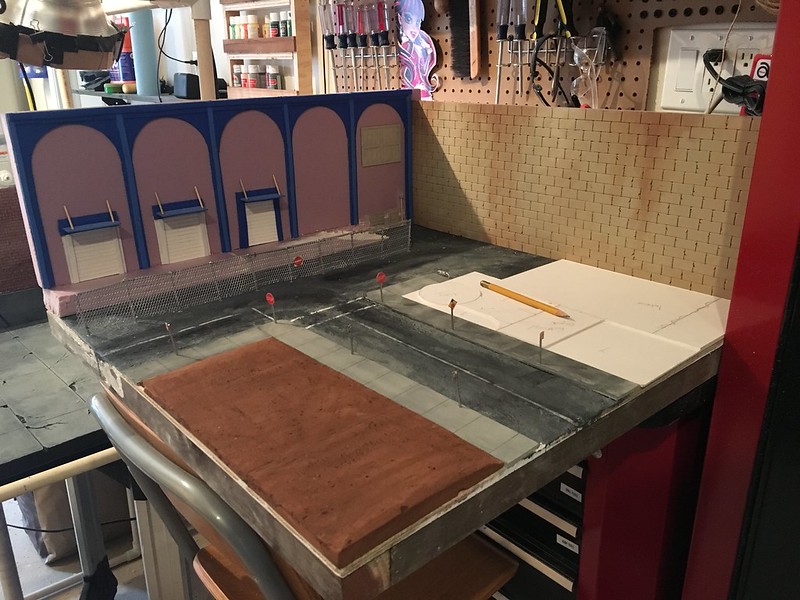 The back wall is painted. The floor of the car dealership is cut and glued from illustration board, which is what 95% of the finished car dealership was made from. In the foreground, I carved some foam into a small rise to add some height to the scene. It does not interfere with the angles for taking pictures. Road signs have been made and added too.

The walls of the car dealership are drawn and cut to size on illustration board. From there it was adding the million details and paint to get this store ready to open.

It is just about time to start seeing Jurassic World toys pour into the stores. We are a little over one month away from a hotly anticipated summer blockbuster.

The first to start rolling onto shelves are the Matchbox vehicles. This is a line of vehicles that have been specially painted with Jurassic World markings.

Of course we are going to see lots of 4×4 vehicles in the single sets. We also have one boat.

There are also two 2-packs each with a flying vehicle.

This is a no-brainer to bring out in the Matchbox line. Mattel already had a deal in place with Universal for the Fast and Furious franchise, so it is only natural to strike again with the same company. It looks to be all reuses in the line. Matchbox has way more 4×4 vehicles than Hot Wheels, as well as medical vehicles and larger scale flying vehicles.

There are rows of seats in the back of this one.

The back of Mauler Hauler opens, and there are dinosaur bones back there.

Yes, this is a VTOL plane, and the wings do rotate.