Wave 1 of Guardians of the Galaxy Volume 2 has been out for a while, just in time for the movie to come out. I personally loved the movie, and I am happy to have this new version of Star-Lord, Peter Quill.   I started with Nova a ways back, and you can catch the review here. 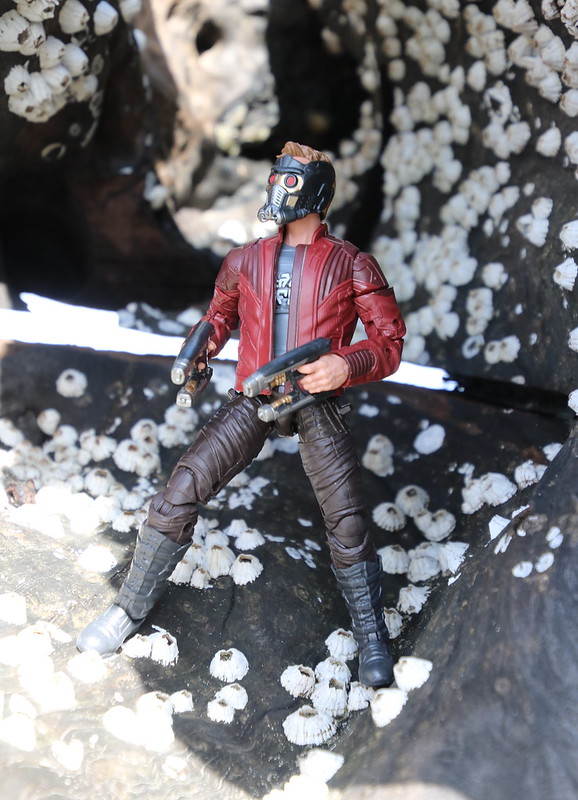 He is similar to the original version that came out in that he has a head, masked head, and 2 guns. This time around his outfit is different. It is not better or worse, it is just different. Hasbro has really done a great job with the movie figures since they started adding them to the Marvel Legends line. This figure is no different.

He is actually a bit of an improvement around the head. The new mask has better details and more paint. Even on the back. And the face is great. How did I spend 2 hours in the freaking sun taking pictures and not get any of Peter’s face? GAH!!! Actually I know why. In the initial photo shoot I did with him, I was on the beach up in Northern California. The weather was awesome and I was having a great time. Until I got attacked by a pack of dogs. Running around and sniffing my stuff. I had to pack it in. I only got a few shots that day, and then when I did my second photo shoot, I forgot to get the head out. Live and learn. I actually have one of him unmasked that I will include with the whole team when this is all said and done.

I am happy with Peter. This is the start of a really nice wave, and best yet, it is two waves this time around, so we get more characters. Yay! More to come…