Spider-UK, where things in the Spider-Verse take a strange turn. So, of you know your history, back in the 80s, Excalibur was a fantastically crazy comic. For my followers, you know that was the one that started it all for me. Well, there was a guy named Captain Britain. He was like Captain America, but even more muscular. Well, the same is happening with Spider-UK. He is like Spider-Man, but a lot stronger.

From a different Earth (833) William “Billy” Braddock (note the name is almost the same as that of Brain Braddock (Earth-616’s Captain Britain), and is a mix of Captain B, and Spider-Man. The multiverse has allowed Spider-People to come out of the woodwork, and that is fine with me.

It is nice to see a buffed-up version of Spider-Man. He does not have quite the articulation of the thinner Spider-Men, but that is to be expected. You get more muscle, you lose some of your motion. That is just life, and it is reflected in the toys too. 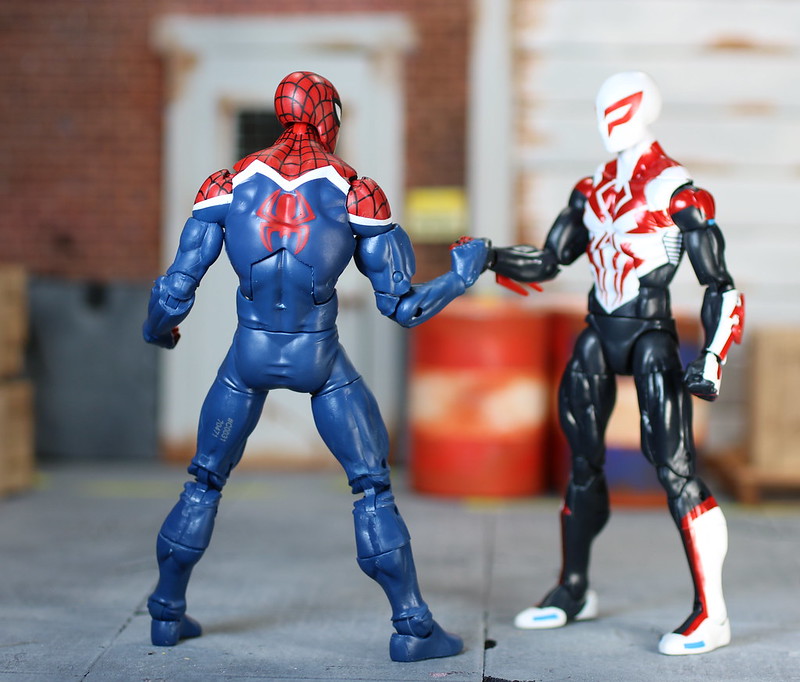 Let’s move away from our Spider-Man for a minute and take a look at Ms. Marvel. Hey, that isn’t Carol Danvers! Nope, Carol has moved on to become Captain Marvel, so that left the mantle of Ms. Marvel open for a new recruit. That is where Kamala Khan comes in. She gained the powers of being a polymorph, where she can take on any shape. Think Reed Richards of the Fantastic 4.

Kamala is a Pakistani-American, and takes to wearing clothing that is appropriate for her culture. The suit is made of a Biokinetic Polymer which becomes very malleable, allowing it to change with her.

The figure is a short buck with thin appendages, just like Kamala. There was a lot of work that went into making this whole new outfit, and it paid off. She looks great. She wears the red and blue of Ms. Marvel, with the added lightning bolt of gold that she wore in her later black outfit.

She comes with two extra body parts. Elongated and exaggerated arms and hands. In her regular form, she has two fist hands. When switched out for the bigger hands, she has one fist, and one open hand. That allows to an added bit of playability. And being that she comes in the Sandman wave, she will need some bigger appendages, since you know Sandman can get pretty big himself.

Oof, poor Goblin. He just can’t catch a break in this wave. Seems that everyone wants a piece of him.

Two more characters in the wave down, and we have reached the halfway point of this wave. Spider-UK is a nice new touch to the ever growing Spider-Verse, and Ms. Marvel is a unique character all her own.