So cool that all 6 figures got their own emblems on their box tops.

Today we are going to take a look at the men of the Marvel/Netflix series Daredevil. Hasbro is working their way toward giving us the 6 inch versions of the Defenders. They are starting with characters built around Daredevil and expanding from there. That seems only right, as Daredevil was the first and breakout hit of the Netflix attempt at making Marvel shows on a digital platform. And then we were introduced to The Punisher in the second season, which got a lot of hype and his own series. So, we will start with these guys, and then move onto the women of Netflix, before moving on to the comic figures in this wave.

I was hooked from the first episode. I HAD to binge watch that show. So when it was announced that Hasbro was bringing out Daredevil from the show in the Legends line, I was ecstatic.

What we got was just about perfect. The realism that Hasbro has brought to the Legends movie figures carries over here. There are so many small details in the outfit, from the straps, to the textures in the fabrics used.

He comes with gripping hands that allow shim to use his billy clubs. He also has a set of fists, which he really needed because he goes around punching people much more than using the baton.

The Punisher came around in season 2, and boy did he make a splash. Many knew Jon Bernthal from his time on the early episodes of The Walking Dead. It was going to be a toss-up if people were going to be on his side after being an antagonist on TWD. But he was greeted with open arms. He was like an exposed nerve ending for both the viewer and Matt Murdock. Matt had to come to terms with how similar he was to The Punisher, and had to look internally and decide what he wanted to be as a hero.

This figure of Frank Castle comes with a trench coat, and his telltale bulletproof vest painted with the white skull. We saw that chest again at the beginning of Punisher Season 1, before he sheds if for most of the season, thinking that his time of being The Punisher was over. The vest will return, but not the overcoat.

Hasbro did a really good job with the likeness of Jon Bernthal, from the haircut to the 5 o’clock shadow. He even looks pretty banged up, which is how he seems to spend his life now.

He comes with two guns, a black assault rifle with grenade launcher, and a silver 45. The rifle needs a strap, and the handgun needs a holster, but other than that, nice weapons to add to his arsonal.

I am very happy with the first two figures in the Netflix series. Up next we will look at the women. They turned out equally as good.

The newest of the Marvel Legends figures as a Walgreens Exclusive is Namor.

Namor is a solid figure. He has all of the requisite articulation, and a paint job that is top. The pearl blue in his vest is outstanding.

He comes with two accessories. He has his trident that is painted white at the top and blue accents painted down the gold plastic handle. It was nice and straight out of the box. Sometimes when we get accessories as tall as a figure, they can get a bit warped in the packaging. Not this one.

He also comes with a pair of flat hands. We have seen these before with Iron Fist and his chopping hands, and with Speed Demon as his fast running hands. This time they are once again well used as swimming hands.

This figure came with a lot fewer accessories than The Punisher, but I don’t know what all you would want to add to him. A fish maybe? I was not looking forward to Namor as much as I was looking forward to all of the rest of the Walgreens Exclusive figures (Punisher, Ant-Man, Daredevil, and Agent Venom). He is a good looking figure, and a welcome addition to the family, especially since I missed him the first two times he was released a long time ago.

Another good choice by Walgreens to get as an exclusive. I don’t know if there is someone at Hasbro/Marvel leaning in and telling Walgreens that this is going to be a must-have for fans, but this is the second exclusive figure to come out of the Netflix/Marvel shows. 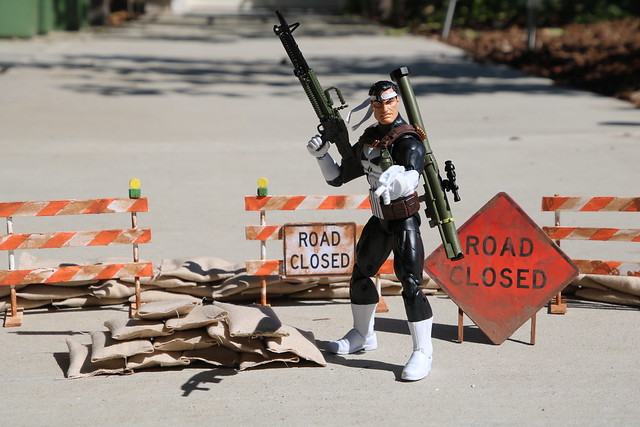 Frank Castle here looks great. He comes with so many great weapons, and outfit is spot-on.

Frank mostly runs around shooting people and blowing stuff up, so you would imagine that he would get a few weapons. And he does. He gets a really big machine gun that is reminiscent of the Vietnam era, which fits right into Frank’s past. He also comes with a rocket launcher that pegs into the hole in his back. Finally he rounds out the weapons with a white shotgun with a canister loading system. For me, the shotgun is the weak weapon, as it is white. Who runs around with a white shotgun? I could not find anything about it on the Internet that shows the Punisher carrying such a weapon.
In addition the physical weapons he carries, he also has a shoulder holster filled with bullets and grenades. Everything a vengeful vigilante needs in a day’s work.

Frank comes with two heads. The bandana wrapped head with a grimacing expression, and a hair falling in his face with a five o’clock shadow stoic expression. Both work great with the figure. Of course if you are into photographing your toys, you will be happy to have both heads, as you get different vibes from each head.

The body is pretty standard. The paint apps are well done. The skull on his torso looks great against the black suit. The only drawback I could find in the whole figure are in the hands. Frank does not have a trigger finger, on either hand. That is a bit of a problem for me. He is going to be holding a gun in every scene. He should have trigger fingers on both hands. A bit of a mistake on Hasbro’s part.

Aside from the finger mistake, this is a good figure. Walgreens has another win on it’s hand. I have dozens of Walgreens near me, but I have such a hard time finding any of the exclusive figures. Luckily this figure overlapped with Namor, so I picked up both online for their normal $21.99, and got free shipping. So I didn’t have to kill the Earth with hours of driving around, and I have two new figures for my collection. Come back next time for a look at Namor to round out the Walgreens exclusives…for now.