As we continue to look at the comic book side of the Giant Man Series, we get a look back to the good ole boss of SHIELD, Nick Fury. Back in the day, this guy with grey sideburns was the man. Probably broken a bit by his live action portrayal by David Hasselhoff.

He is a well done figure. Pretty basic body, but really the bodies that are being used now by Hasbro are the best (in the price range). He comes in a great outfit with some great details. It is modern enough to fit in with other SHIELD figures like Maria Hill.

If you want to vary it up, you get a choice of heads. First up, Dirk Anger. Who the heck is that? I didn’t know, but thankfully Wikipedia did. He is apparently a creation of the great Warren Ellis and Stuart Immonen, who wanted to use Nick Fury, but couldn’t/ So they turned Fury in to Anger and ran with it. To have it added to this figure’s accessories is amazing and fun.

You also get a SHIELD agent head, which I have seen in droves all over the internet at an army builder. I have only ever seen one in the wild, and it is this one, so no army building for me.

Nick is a great figure. He is a good throwback to the comics, and who better to have in a Civil War line than the man in charge of SHIELD?

Well, this is a good choice for a comic figure for Hasbro. Basically take a new head sculpt and stick it on a repaint of the comic version of Captain America. They even are able to use Cap’s comic version shield too.

For us, Meh. He is not used since the fall of the Soviet Union, and really we have moved passed the Cold War era stuff. I am a huge fan of WWII, so Cap is great, and so are all of the comics from the 40s. The Cold War just doesn’t do it for me.

Red Guardian is a fine figure. This Cap body has been used a few times now, for figures outside of Cap. But since this is supposed to be the Commie version of Cap, it is a natural choice. I just think this is not going to be anyone’s choice of a favorite figure. He will be lost to time at the back of the shelf of more interesting and relevant figures.

Time for the Big Boy. THIS is what Build-a-Figures is all about!!!! Give us parts for a figure that will end up being half again the size of the next figure.

This time around, you needed to get your hands on all six figures to get the parts to build this guy.

Scott Lang is sporting his outfit from Civil War, of course. It is an updated version of the Ant-Man costume from his first movie. I really liked the first costume, and didn’t think it needed an update, but if you are going to go extreme with size changes, you might want to make sure your outfit can change with you. You do not need a wardrobe malfunction when you are that tall. 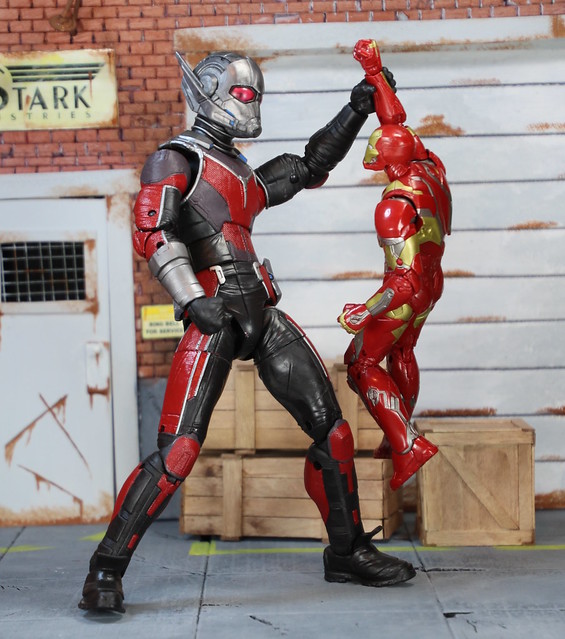 I have a feeling that it is no coincidence that the Giant Man figure came out just before the new 12 inch line of Marvel Legends. Hasbro really did a good job of upscaling their line to make sure that this really big figure still functioned the way the smaller figures did.

At 10 inches, he is more than tall enough to take on the baddest of bad guys and make his presence known. The details of his outfit scaled up so well. The textures of the materials are great, and the details get better with different gloss and matte paint schemes. 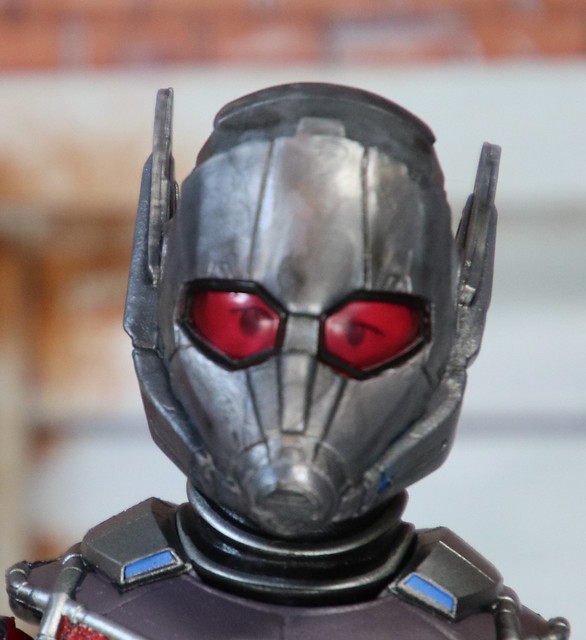 His face is the best part, as with most of the best figures. He wears a full helmet this time around, so his face is hidden more. So Hasbro went and added clear red lenses on the figure with eyes on a molded face underneath. This is another case where money could have been saved by just painting the lenses red. But they went the extra distance, and really gave the collectors a treat. And the collectors will not forget that. We get the bum end some times, but others are shining moments that we carry with us to the next wave of figures.

The only problem I have with the whole figure is his left hand. It is the open hand of the two (the other being a fist). I feel like the fingers are a little fat, or maybe not long enough. Either way, the hand is a little bulky, and the opening could have been a little wider. As it is, with a bit of a struggle you can get an enemy’s wrist in there for holding.

This is another great line for Marvel Legends, and Hasbro. I like the movie side of the line better than the comic side. It feels like the comic side had to dig pretty deep to fill in three figures. Fury is a natural choice, but Nuke and Guardian are a bit old school, and out dated.

This is by far not the end of the Giant Man Series. There is still Namor (an exclusve to Walgreens), War Machine
and Iron Man Mark XXVII (in a two pack), Winter Soldier and Falcon (who are single packs)
and Spider-Man, Captain America, and Iron Man (beaten to a pulp in a three pack). That is 8 more figures added to the 7 already released. This is the biggest wave ever for Marvel Legends. I am pretty sure the first time we have a repaint (Cap and Iron Man 3-pack) in the same wave.

Well, that is the end of the Civil War’s main lineup. On to other stuff for a bit before we head back to Marvel in a little while. We have so many other things to look forward to here in the near future, so stay tuned!