Boy is that a dusty box. I was doing a lot of scratch building for a new diorama, and I didn’t see how much stuff was stuck to the box.

Target has been getting some larger packs while other stores are getting single figures as their exclusives. The Target 3-Pack consists of Jyn Erso in her Jedha outfit. The people that went out and got her on Force Friday were not happy when the news came out a few days later that she would be included in this 3-pack with the exact same outfit and gun. Thankfully my Force Friday was more miss than hit, so I didn’t find her, and was happy when the news came that she would be available in the 3-Pack. Along with her is Cassian Andor in his flight jacket. This is different than his first release in his cold-weather gear. He also comes with a very special weapon. Finally in the set comes the Imperial Death Trooper. They forgot to mention on the box that this is the Death Trooper Specialist. Similar to the very loved Sandtrooper, the Specialist comes with a pauldron over their right shoulder, and additional weaponry across the webbing. This version is missing the Long Range Blaster Rifle that we have seen in the previews, but more on that later. For now, let’s bust this pack open and see what have to play with.

Jyn is a fantastic figure. I have seen some problems with the eyes, though mine look up slightly, all three packs at my Target seemed to be okay. She comes in her head scarf. The gun is packed separately, but fits in to the holster on her hip. The holster has a strap to keep the gun securely in place.

The head scarf is removable to show Jyn with a bare head. She has her hair back in a low bun, but with parts hanging down on both sides of her face.

The gun is a nice little thing. It is well painted in black and silver. 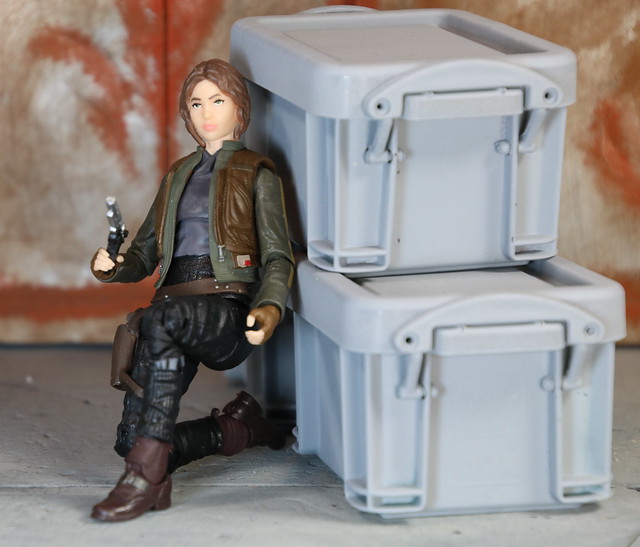 For the fans that got her early, they will be a bit erked to have to buy her again to get the other two characters. And they have good reason to be bummed. There are many version of Jyn we could have seen, and I don’t think we are done yet.

This time around, we get Andor in his flight jacket. He matches Jyn with their stripes down the sleeves. The sculpting on this one continues to be great. He is not as heavily padded as he was in his cold-weather gear from the first release, so they had to do a little more work to make the sculpt work. And boy did it. The shirt has an open flap, a little similar to Luke’s shirt flap. He has a low-slung belt holster. A strap goes around his leg to hold it in place. A really good look overall.

Cassian comes with the blaster he came with in the Eadu release, but this time it has a bit of something different going on. There is an extra tab on the back to let you know it does something special. And that special has something to do with the two extra gun parts that come in the box. There is a longer front and a stock for the back.

The parts are better molded than the usual E-11 Blaster Rifles we see every Imperial come with. They are usually a bit soft in the mold. Not this gun though. It is crisp, clean, and well painted. The parts fit snugly together to make a really well done blaster rifle.

This is a great team of Rebels. I am excited to see them on the big screen soon. But that is not all, there is one more guy in this box. 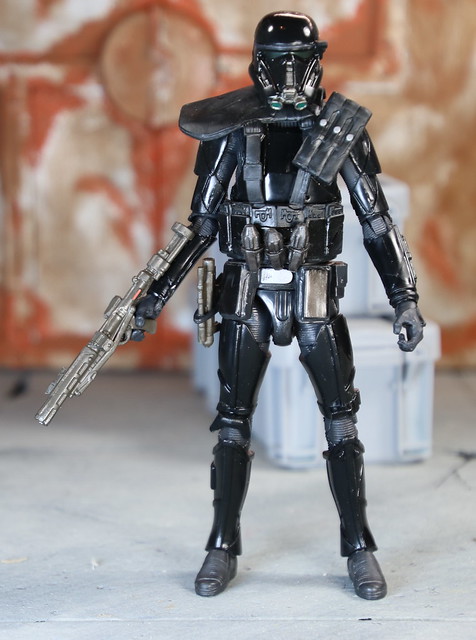 The Specialist is similar to the first release of the Death Trooper, but it has the pauldron with extra ammo, and grenades attached to the webbing. Is that enough to warrant getting this 3-pack? 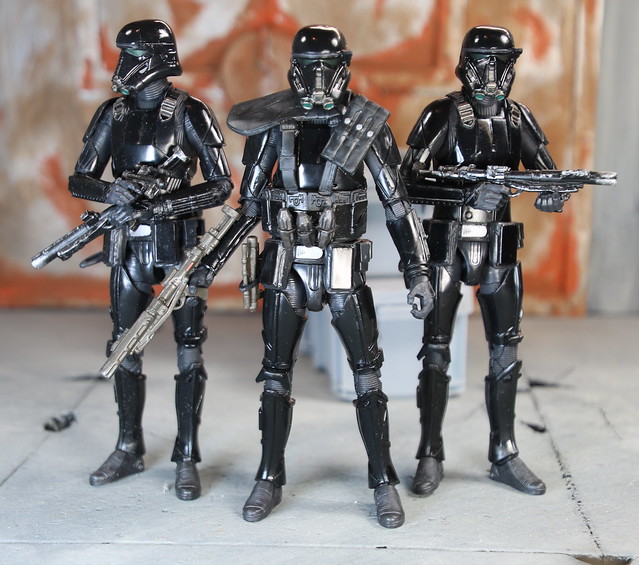 For those that already got Jyn, I would say it is still worth it. This guy looks different enough from the other Death Trooper. He looks pretty hard core. He comes with the standard modified E-11 blaster rifle and the SE-14 blaster pistol, both molded in grey plastic. 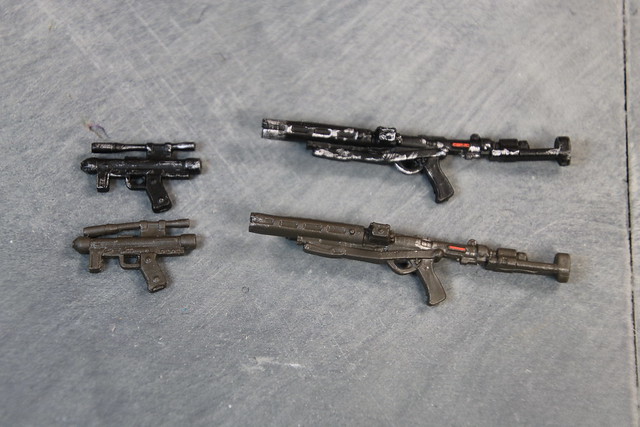 I have already modified my two sets from the Death Troopers I have. I repainted them black and added silver scratches and scrapes as they appear in the movie. 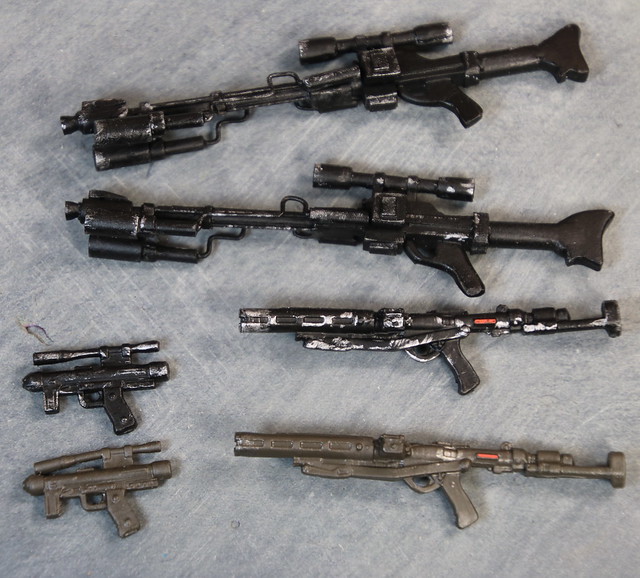 I mentioned before the Long Range Blaster Rifle that the Specialists carry in the movie previews. I went ahead and built my own. I made two, since I figured it would be just as easy as making one, and who knew who was going to have to wield one of these? I made them out of scrap styrene and wire for the piping along the sides. 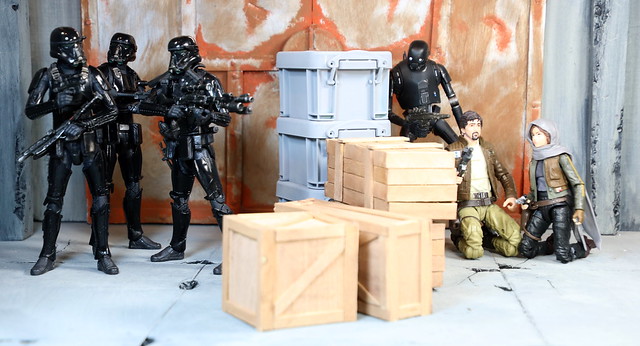 With the addition of K-2SO, this is a Rebel team that is coming together nicely. I think we are out of Rebels for now. I have some more Imperials coming in soon, and the battle is really going to heat up.