I don’t play around in the 12 inch scale a whole lot. The good figures tend to be really expensive, so I shy away from them for the most part. But when something like Black Widow goes on a deep sale at The Disney Store, I jump all over that kind of deal.

She is pretty much all I have seen that is left from the Ultimate Series of figures. I don’t know a lot about her, but overall I am pleased with her.

She comes in a cloth outfit that has a zipper in the front. She comes with a set of stun batons that are nicely colored. She also comes with 3 guns (2 handguns and a rifle). There is also an alternate set of hands.

The outfit looks nice. It fits well and has a really good looking material. The holsters do not stay in place when playing with her, and moving her around for posing.

She has a pair of gauntlets that we have seen her use before to shock an assailant. Unfortunately, the bracelets have blue electricity shooting out of them, and it does not look very good when she is holding her guns or just standing there. I might have to cut off the electricity.

She has really good range of motion with good articulation, and fabric that lets that articulation work. If you have a pose you want her in, she can probably make it.

I am a bit skeptical about her being a $34.95 action figure. She is nice, but I have trouble thinking she is $35 nice. There are a lot of really good quality accessories and the body is well done. I got her for $20, and I think that is a GREAT deal for this figure. I checked the DisneyStore.com website, and now they are going for $14.99. A steal.

If you are a fan of Black Widow, or want a good set of clothes and guns, you might want to head over to your local Disney Store or get online and pick her up.

Finally we get a comic version of Black Widow. Mostly it looks like Mary Jane Watson in a black suit, but we get the point. It was a great head sculpt with fantastic hair, and the body was equally as good. So we should go with it for a while longer.

She comes dressed all in black save for the gold belt and the matching bracelets. She comes with a pair of black handguns that we have seen before. Most recently we have seen a silver version used by Bullseye in the Man-Thing wave (that I have not yet reviewed but have photographed, so they are in the queue to drop soon). 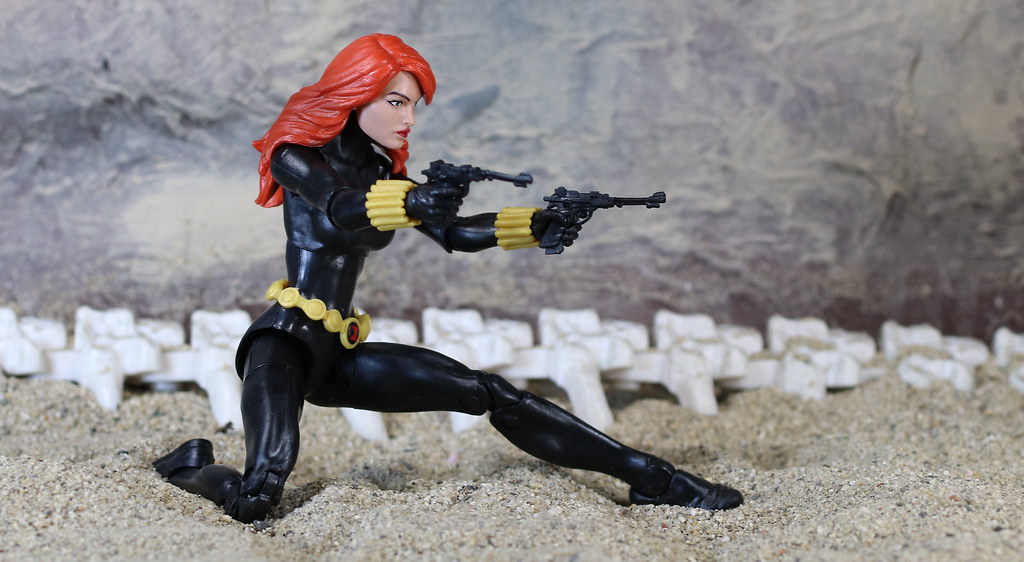 This is a pretty plain figure, but she is a solid one. She has great movement in her articulation, and she is well sculpted. An all around great figure.

The wave is 6 figures. Most are a skip for me, but I was so happy I lucked into finding Natasha on the peg at my local Toys R Us. The rest of the figures are a repaint of Punisher, a repaint of Spider-Man, a Repaint of Captain America, a re release of gaijin Wolverine, and a partially new Iron Man. I will keep my eyes out for the Iron Man, since you can never have too many Iron Men, but the rest of the wave is a pass for me, unless I luck into a good deal somewhere. This is a case where I am glad there is no Build-A-Figure in this wave, since I am not too excited about 3/5 of the wave.

The women of the Marvel Universe continues to grow, and they are looking great. Hasbro has continued to do a great job of bringing better body sculpts, nice sized feet for standing, and great head sculpts. Though they are still a bit hit and miss with the hair, for the most part, they have gotten that down too. This is a great figure to add to my collection. 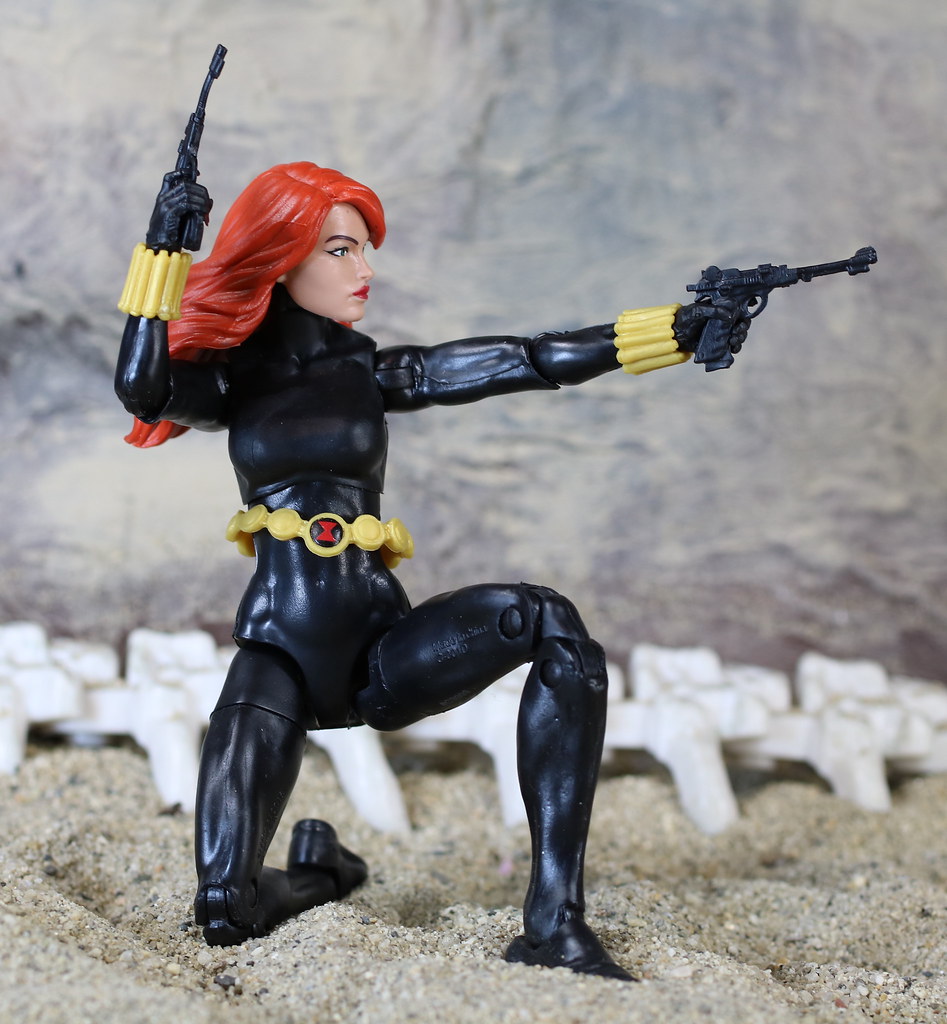 We are going to take a quick look at a few multi-packs that came out a few years ago.  I was not able to find them initially, but they were available in the secondary market (Amazon) for great deals.   They have been sitting on the floor way too long, and wanted to be let free to play.

This is the Amazon.com exclusive set from Age of Ultron. It contains a really large new mold of Thor, a retool of Black Widow, a new tool of Bruce Banner, and a retool of non-Legends Hawkeye. The set is okay. I really wanted to get my hands on a decent movie Thor, and of course the Bruce Banner. We have had Hulk, but this is the first time we get Bruce.

Black Widow is a fine figure. The colors on her outfit are kind of fun. They are not very movie accurate. She comes with a set of batons to break some bad guy heads. Hawkeye is the weakest of the set. It is clear that he was not a part of the Marvel Legends line originally. His face seems a bit smooshed, and the rest of his proportions are way off too. Not what we are used to with the Marvel Legends movie figures.

This is a fun set of great characters. We get Agent Coulson carrying his really big gun. He comes with two heads, the alternate head wearing sunglasses. They did a great job of capturing the likeness of Clark Gregg.
The second figure is Nick Fury. He comes clad in his black outfit and black trenchcoat. He comes with two handguns that have working holsters, one on the hip, and one on the chest. Then there is Maria Hill. She uses the Agent 13 body with a new head sculpt.

This is a great set to fill out some of the non-super powered characters in the MCU.

This set, I found for a good deal on Amazon I think. It was a super sale, and I could not miss getting my hands on Ms. Marvel. And she does not disappoint.
She comes with Captain America, who I think is a reused version. And then there is Radioactive Man. We can’t have too many bad guys, and to have one that is opaque and glowing is pretty fun.

He is a big, tough version of Cap.  He has a lot of detail, and I found the paint to be pretty good.  He comes with his shield, which can be placed on his wrist, or thrown on his back.

He comes with the really good articulation we have come to know from the Marvel Legends line.   Double joints in the knees and elbows.  The leg joints are pretty soft.  I am not too keen on the rubber use that makes the knees and elbows.  The knees on my Cap are pretty loose.  I am expecting to find him laying on the ground quite often as he will no doubt loose his balance and topple over.

We have seen a lot of Cap’s as of late.  I don’t think I would have picked him up if I didn’t need the Mandroid part.   I think the movie version of Cap was pretty spot-on, so this is not that big of an addition to my collection.  Guess we will see what happens with the transition to a new Captain America.

I am not a huge fan of Black Widow in the Marvel movies.  Scarlett Johansson is far from one of my favorite actresses, so I would have been fine if this had been a comic version, but the figure is okay.   She comes with two heads.  The long hair version above, and the short hair version below.  She also comes with 4 hands.  2 open and 2 grasping.  I cannot believe they would give us a Black Widow and not give her some weapons.   She has molded in guns on her hips, but that is all.

She has the same good articulation as we get with all of the Marvel figures.  It is hard to get her into poses.  She has skinny body parts and high-heeled boots that make it tricky to get her to stand on her own.  The outfit has so much detail close-up.

Six parts all in a pile.  This time I didn’t have to option to begin building Mandroid early.  Black Widow had the torso, and as she was my last figure, I just had a bunch of parts waiting around.  But from the size of the arms and legs alone, I knew this was going to be a big figure.

He is so easy to snap together, and then he can begin to wreak havoc.  The only problem I had with him was the paint on his chest.  It is a very big chest, and the plastic from the front of the box rubs against the eagle stamp.  When I found Widow, there were two, and I took the one with the least amount of damage to the paint.

He shares some of the same parts as the previous release Iron Monger.  From the abs down to the ground is the same, and they reused the fists.  The torso, arms, and head are new.  He is a great figure.  Well worth the wait and all of the hunting.  If you are still looking for parts, don’t give up, he is worth it.