It has been a while since I looked at a DC Superhero Girl. I was actually on the Mattel Toy Shop site at the end of last year since I heard they had She-Ra for a super good price. I saw that they had some Katanas left for an awesome price as well, so I pounced on the deal. I got her, took pictures, and then they sat in a folder on my desktop since January. It is June! Time to clean house I guess.

Well, the box art is what this set is all about. The fine people at Mattel did a fantastic job with some amazing art on all sides of the box.

Inside the outer box is a window-box that portrays Katana about to be attacked by some other bad girls.

Slide the box open and there you have the doll. She looks ready for action. She is clad in armor, holding her katana blade. Along with the katana is a bladed staff, 2 sai, a knife, and 4 throwing stars for good measure. That is a lot of accessories for a DCSG. Way more than any of the other girls get. That is to be expected in a SDCC exclusive set.

She has a stand with her name on it. The sheath of the sword attaches to the base to make a really nice display.

She is able to hold all of her weapons, except for the throwing stars. They are a bit on the small side for her grasping hands.

It was a nice touch to include sheaths for the weapons. She is able to wear the knife on her back.

There are a lot of parts that make up Katana. All of the armor comes off, leaving her in a grey/black suit. You can see that her arms are two different colors, so she is limited to wearing one outfit. Similar to Harley Quinn with painted legs.

This is a nice set. I do not like how she is looking off to the side. It makes it hard to pose her for photo shoots with the other girls. I saw she is still available on Amazon, but the price is back up to $90. Fear not, the standard version is out now, and is $21.99. Way better in price. I have not seen her in the wild yet. She was supposed to be coming out with Frost, who I have also not seen the wild. I will keep my eyes peeled for them.

Until then, there are lots of other great girls that have come out that we will be looking at shortly.

The 1/6 scale is my favorite to build in. I love the 1/12 scale figures, like Marvel Legends and Star Wars The Black Series, but there is something about working in this larger scale that allows for some finer details, and the ability to play really big. 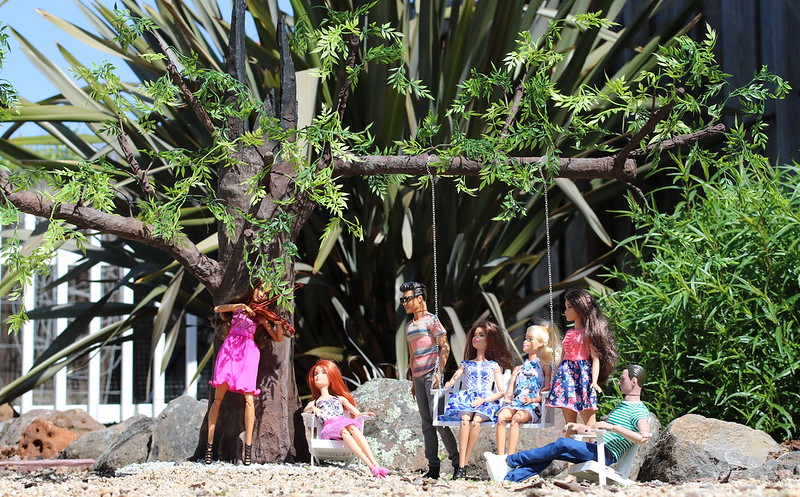 One of the biggest problems with this scale is of course the size of whatever it is you are building. In this case I had it in my mind to build a chair swing. And the only way I wanted to see that swing was hanging from a tree. Now that posed a few problems since trees are big. That is of course the first problem revisited. Second is that a tree has to be rather robust to hold a swing with someone swinging in it. 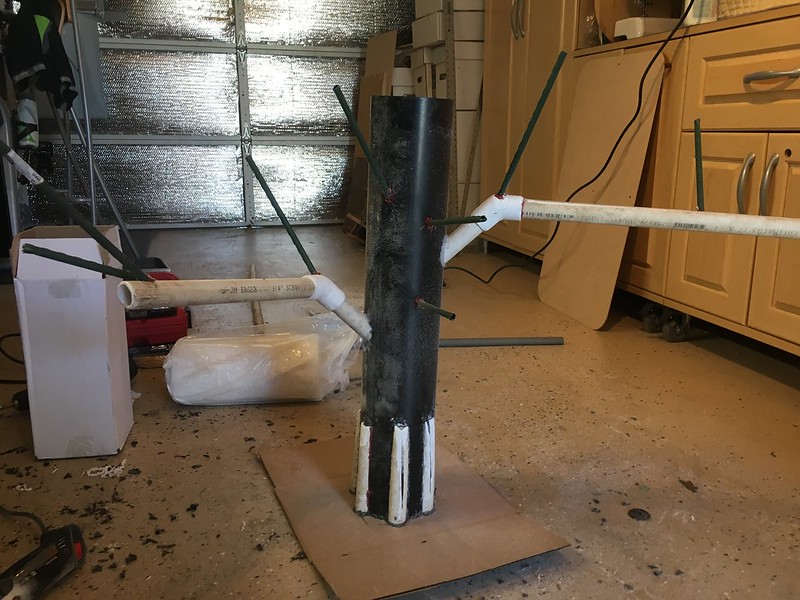 The answer came to me as an old piece of PVC sewer pipe I have had laying around for the last 12 years, after I finished remodeling my house and ended up with a bit of extra pipe.

So, now I had the width of the tree. To remedy the height, I figured I would have it broken like it had been struck by lightning. Then I have a display that has an interesting story, it is not too gigantic, and it will still be big enough for the larger 1/6 scale figures. 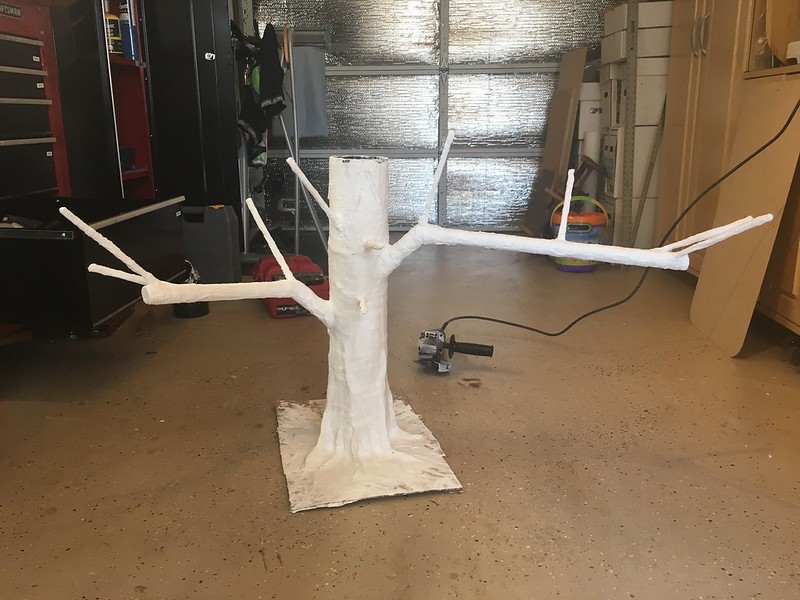 The material I used is Rigid Wrap. I ordered a 5 pound roll from Amazon made by Activia. The directions were printed on the box. Cut, wet, and stick. That was about it. From there I began to experiment and see what I could do for things like texture, roots and old branches that have been broken off. 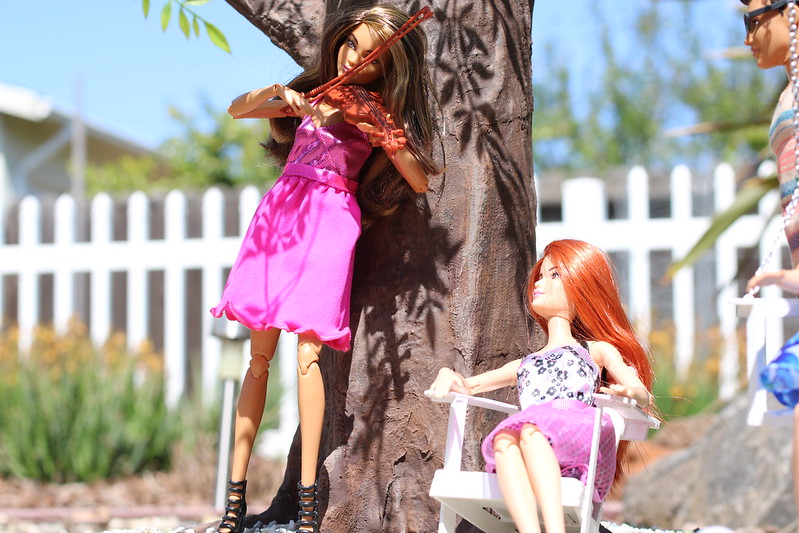 I did have one setback when I was building the long branch. I had originally cut a hole in the trunk and stuck the smaller piece of PVC in the hole. I glued it with hot glue. It held well until I started to add the Rigid Wrap. The Rigid Wrap added a lot of extra weight, and started to pull the branch down. I added wire that went around the bottom of the branch and then attached back into the truck. I also added a wood brace under the branch. This was all covered with many layers of Rigid Wrap that covered up the stuff that didn’t belong as well as created a strong cast.

For the broken top, I cut the PVC with a cutting wheel. The triangular pieces that were cut off were added to the top and glued into place to add different heights to the top and gave it a more natural look. 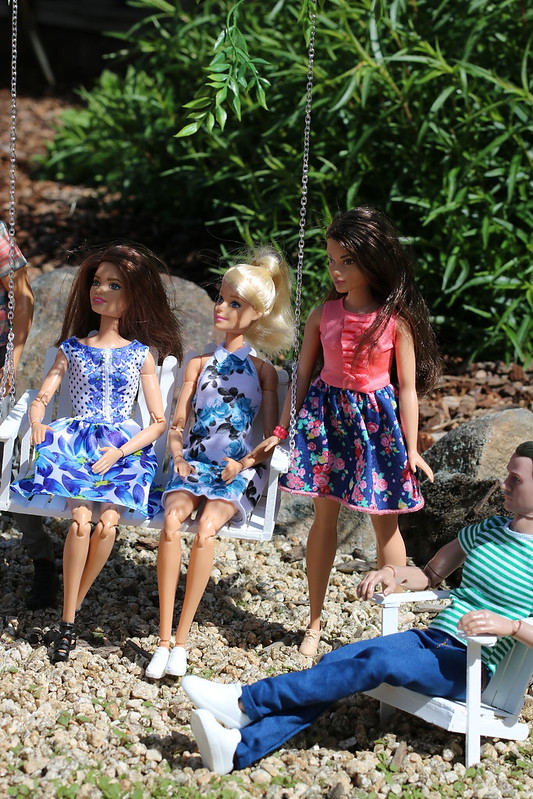 For the leaves, I knew it was going to be tricky to find something that was going to be in scale. It turned out to be really easy. I was in Michael’s and they have a plastic plant display area in the store. A giant bunch of branches with the proper size leaves were $14.99. I happened in at the 50% off sale, so the price was much more reasonable at half. I was not sure I was going to need the whole bunch, but I ended up using it all. The smaller twigs came off with a pull, and I attached them to the tree with bamboo skewers I held in place with more Rigid Wrap cut much smaller. The twigs with leaves were glued in place with hot glue.

Once I got all of that done, it was on to the painting. I started dark and worked my way lighter, creating layers, more in some areas and less in others. I painted from the trunk out, making sure to cover all of the twigs most of the way out to the leaves. 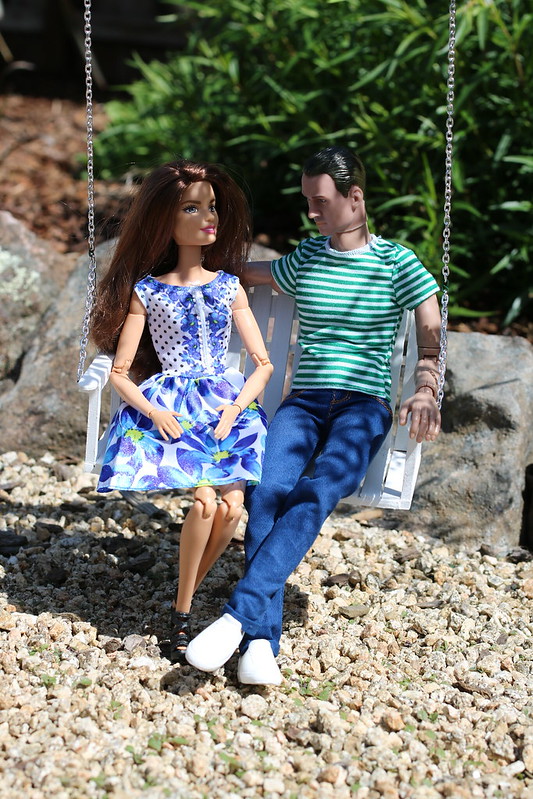 This was a great project for me to tackle. It was something new. I had never worked with Rigid Wrap before, and I love it. I have a few more ideas in mind for other scenery pieces I want to make for some other scales. If I remove the swing, it can be a larger tree for smaller scale figures as well.

Up next, I am working on a car. Barbie’s cars are mostly bright pink, and not anything like what most people would chose to buy. I am working on a much darker but still quite flashy color that should make any of the drivers happy to take the little sports car for a spin. 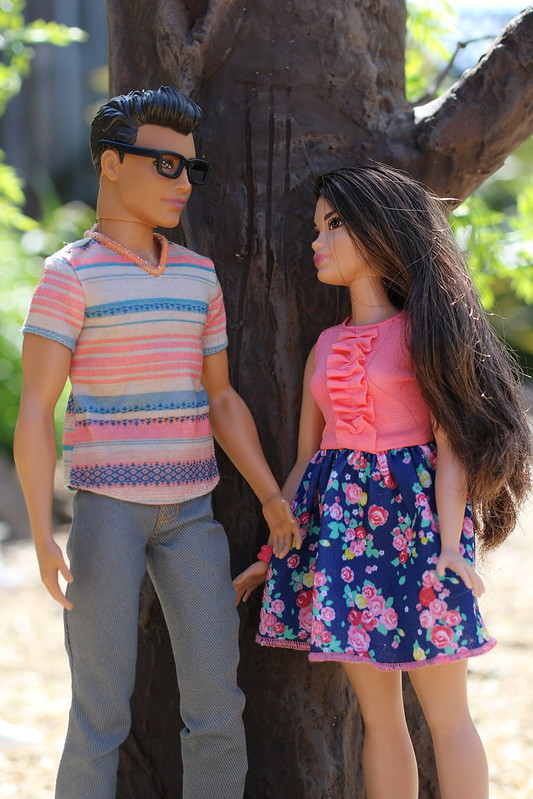