Hound is a figure that we can’t look at without thinking of the version that came out last time. That was a really good version that matched the movie pretty well, and had a ton of weaponry to go with him. How will the new Hound stack-up?

First off he comes out of the box in robot mode. The first thing I thought was just how light the green was. It was a bit too washed out compared to the movie. But I think it was a better choice than the vibrant green used in the last version of Hound.

His head is much bigger in this version, and looks a lot better than the last version that has a bit of a pin-head thing going on. The face sculpt is good. There is a bit of bleeding on the colors, but not too bad.

The guns can combine and be stored on his back when not in use.

He comes with a good amount of weaponry this time around. Two big guns and two smaller guns. None of them are the weapons he uses in the movie. He still uses the same weapons from the last movie, which came with the last figure. There is a reason of the change in vehicle mode. Is it worth it for the wrong weapons? We will see. Apparently all of the weapons from the previous version can be attached to ports across his body.

Standing together, this new version is only slightly taller. He has a lot more bulk to him this time around, which fits the movie better.

In vehicle mode he is a Mercedes Unimog. He is missing the cover for the truck bed that was in the movie, and instead he has a weapons platform. All four guns combine with an extra piece to allow the turret to rotate.

The front end of the truck looks really good. There was some changes to the back, but the front stayed true.

This is a good usage of the guns in this mode. I do really like the way the guns were broken down in the last version. A little more “Robots in Disguise” but this has a lot more playability to it.

Now side by side it is amazing how much larger the new truck is from the old one. The figures were not that much different in robot mode, but the size difference is quite drastic in vehicle mode. 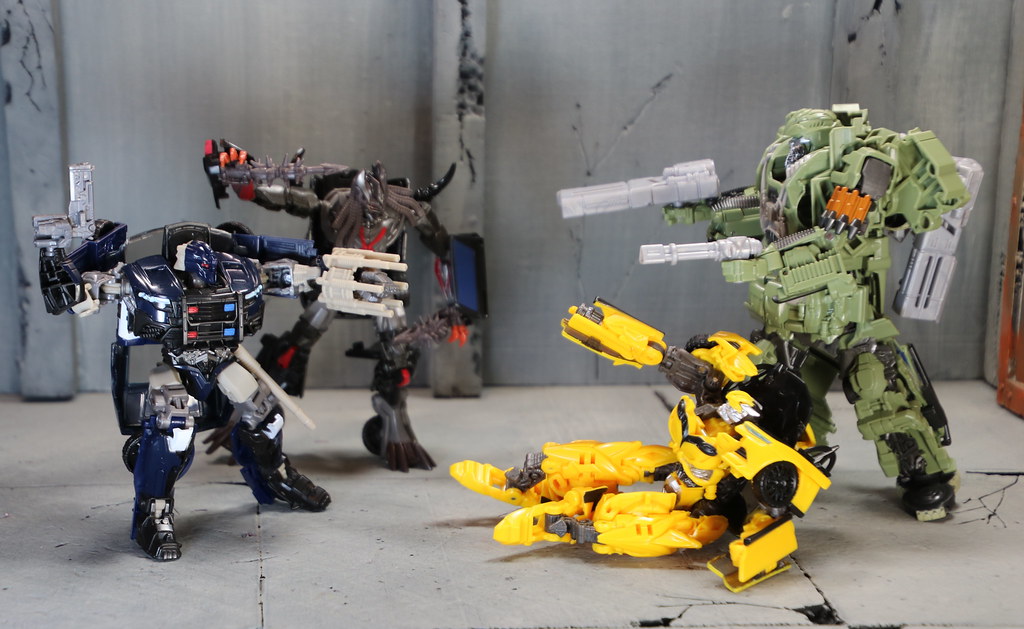 This is another good figure from the Last Knight line. Hasbro has been having some trouble getting figures out to the people and it has been hard to find some of the figures. Most are worth it. I have a few more from the movie to look at in the future.