Broadside is a little hard to wrap my head around. He is Voyager Class, so he is the medium scale figure. He transforms from a robot, into an aircraft carrier, and then a jet. There are figures that can be out of size, but this guy is crazy. Because of the way he works with Blunderbuss, it seems that he is a tiny aircraft carrier, rather than a giant jet. Anyway, let’s take a look at the figure.

Broadside has wings that from the front look like they belong to a jet, but from the back, they look like they are a part of the aircraft carrier. There is a big cockpit hanging off his back, so there is not a lot of greeble hanging around this guy.

He comes with Blunderbuss. A fitting name for this sea-faring Titan Master, as a Blunderbuss was a gun known to be carried by navy and privateers. Too bad Broadside didn’t come with a Blunderbuss to run around with. It seems like they could have, since they gave Sergeant Kup a musket at one point. Blunderbuss is based off of Sovereign who came with Alpha Trion. I would think they would try to mix these guys up a bit more, but oh well.

Transforming Broadside is pretty straight forward. He becomes an aircraft carrier. Nothing too exciting going on there. He comes with little jets that resemble the Aerialbots. It is supposed to help sell the illusion that this guy is actually really big… though he isn’t.

There are a few choices of places for Blunderbuss to sit. One is sitting in the gun mounted on the side of the aircraft carrier. I still think it is a terrible idea for someone to stick their Titan Master out in the elements of the fight. No head, means no robot. Not a good idea.

The second place, is in place of the flight tower. The antenna fold down, and the top flips in half to make a seat. Still not the safest, but better than hanging off the side.

Then there is the third mode. A… jet? This is what happens when you start with someone like Alpha Trion. You have a robot, a space aircraft carrier, and a lion. You go and make Broadside, with a robot, an aircraft carrier, and a jet? There are a lot of differences between a lion and a jet. So you give him a cockpit. Done. Add some wings. Done. And then squish everything in the back together and add some fins and stabilizers to help the illusion. It looks more like a block with a pointed nose than a jet.

I am thinking maybe it is kinda Macross style with giant jets hanging off the back. Maybe a little Jetfire like. Okay, I am back on board with the space jet idea. Too bad the aircraft carrier wasn’t kept as a space aircraft carrier too.

Overall I like him. He has a good robot mode. From there it is a fine aircraft carrier. Too small for any good, but still nice. And the jet is okay. You have to squint at it, but I have seen worse. I don’t think he is going to end up being anyone’s favorite figure of the Titan’s Return line, but he is a solid figure, and some much needed Voyager Class muscle for the Autobot side.

We start with a good bad guy, Sky Shadow. Make him REALLY big, and then load him up with weapons.

Since he is the Leader Class scale, his Titan Master, Ominus, fits into the helmet. Otherwise, Ominus would look too small. Ominus is a new character, as Sky Shadow came after the Headmasters, so he would not have had one of his own.

Ominus is a “pretool” of Dreadnaut. There is the thinking that these two are a “pretool” because of Sky Shadow’s special transformation that is really something that Super-God Megaforce Overlord did back in 1988, and what he will do in a future release. More on that next.

Transformation time. Start with the top half of Sky Shadow. Yup, the top half. This guy breaks apart into a torso and legs. It is always something that worries me, when there are special gimmicks that go along with a Transformer. There tends to be a loss of something somewhere. But the robot mode is fantastic. And the jet? It is absolutely perfect. We are keeping with the forward swept wing look that we have had in the two previous incarnations of the figure. You can see the shield piece can be attached to the nose of the jet, just like the two previous versions as well.

Ominus can ride in the cockpit. There is a full working cockpit stuck right there in the nose of the jet. Fantastic. This is the stuff I was worried about losing, but there it is.

The legs have an amazing transformation to create the tank mode. The details are really well done. The turret and the gun do not move. That is probably the only problem with this whole character, and that is very minor.

Again, there is a cockpit for Ominus to ride in the tank. Also note, that either of these cockpits can be used in robot mode, so Sky Shadow can hide a couple of Titan Masters on his person at all times.

The two vehicles can combine, where a tab on the roof of the tank clips into the bottom of the jet. Not the most aerodynamic addition to a jet, but at least the tank can get air-lifted to where it can best be used.

Then there is the base mode. All of the leader class figures transform into bases. Sky Shadow is no different. This is a really well done base mode. Some of them seem to be more of a stretch to make it look like a base, but this one was well thought out. The main feature of this base is the combination of the jet’s cockpit and the cannon to be the main weapon of the base.

I absolutely love this guy. I cannot wait until Overlord is released. One of this guy is great, but to have two will be even better. The Autobots better watch out with two guys like this running around.

Since I used Broadside to show the difference in size between the Voyager Class and Leader Class, I guess I better cover him next. He is not my favorite, since Sky Shadow was made so fluidly, and Broadside seems to be forced into his different transformations. We will see next time…

We are finishing off our look at the Sandman With the last two figures: Shocker and of course the Build-a-Figure of Sandman.

Shocker:
This is a surprise hit for me. I was not expecting a lot from this guy. I had expected one last cheap rogue from the Spider-Verse, but he is quite good.

We start with the basic buck for the body, but there is added detail to the arms, with the metallic gauntlets. He also has a set of knee pads, that we do not often see on many of the Marvel Legends figures. I would like to have seen them match the color of the gauntlets, but I can see they should be made from a fabric or something, rather than the metal.

He comes with the, now very used, wrist power. We have seen this on lots and lots of figures recently. This is the first time with this color scheme.

The big bad guy. You knew this guy would make an appearance sooner or later. The only other Sandman that we have ever had in Marvel Legends was way back in 2007 with a Spider-Man Film Trilogy themed set. We are two movie Spider-Men past that, so it is about time we get a real comic version. And boy do we. 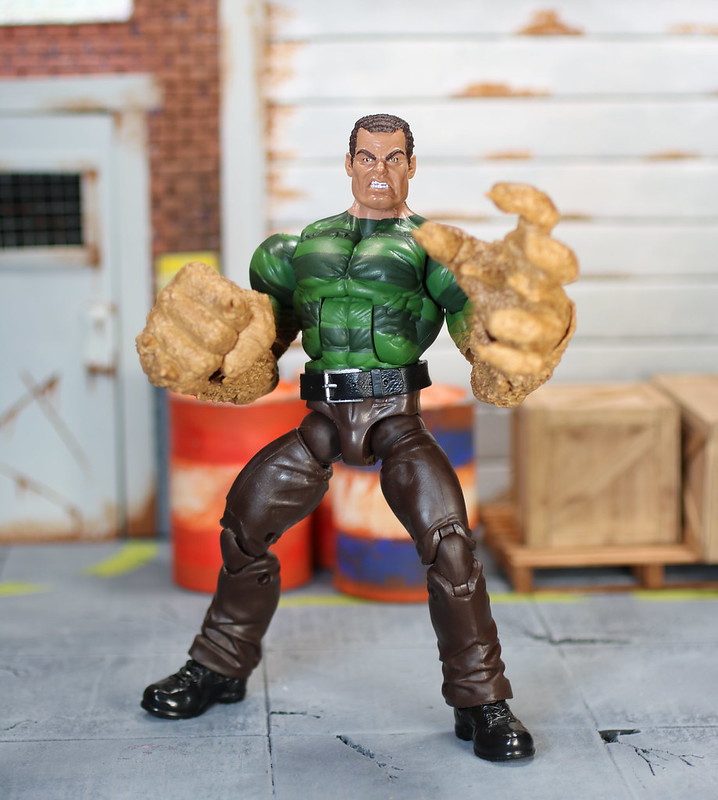 He comes angry and angrier. Two head sculpts. There is the mad version, and then there is the extra mad version where his head is messed up. 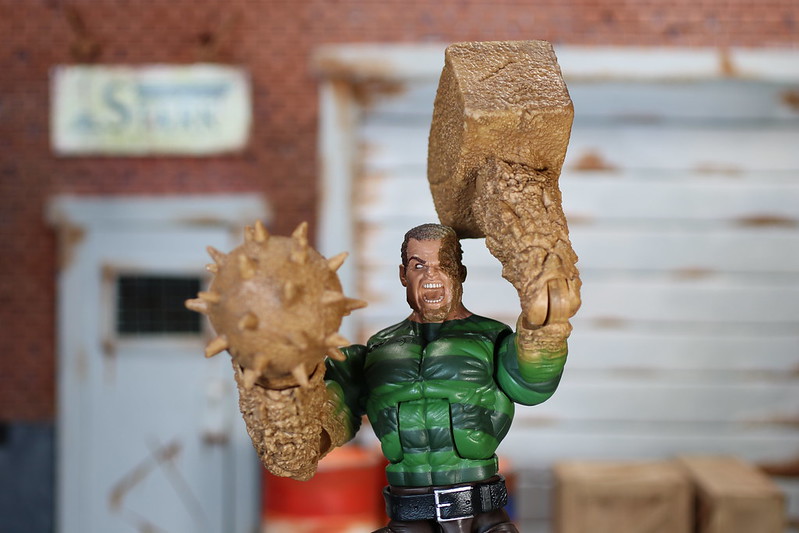 Along with that, he comes with two sets of arms that can be changed out. One set consists of two hands, one in a fist, and one grasping. The playability is high with this one. The other two hands are a mace and a block hammer.

Now it is time to culminate this wave in a battle! Spider-Verse against the Rogues. 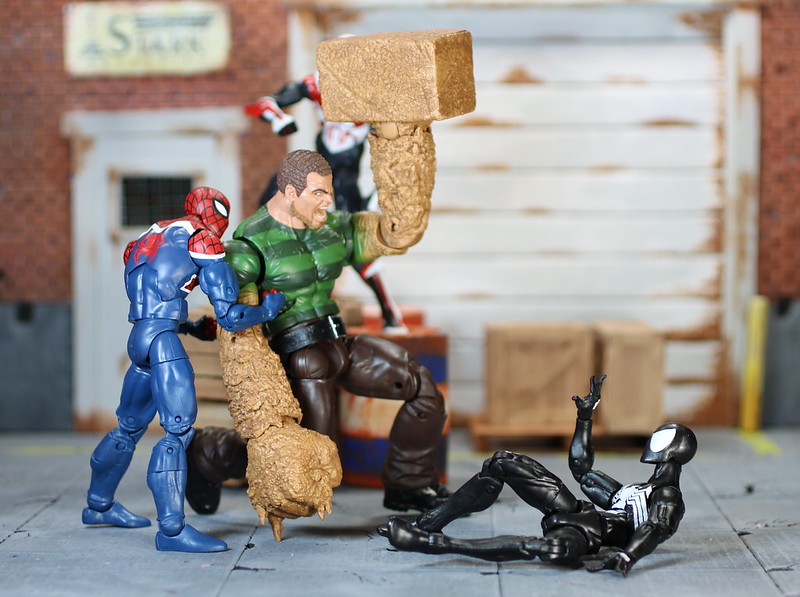 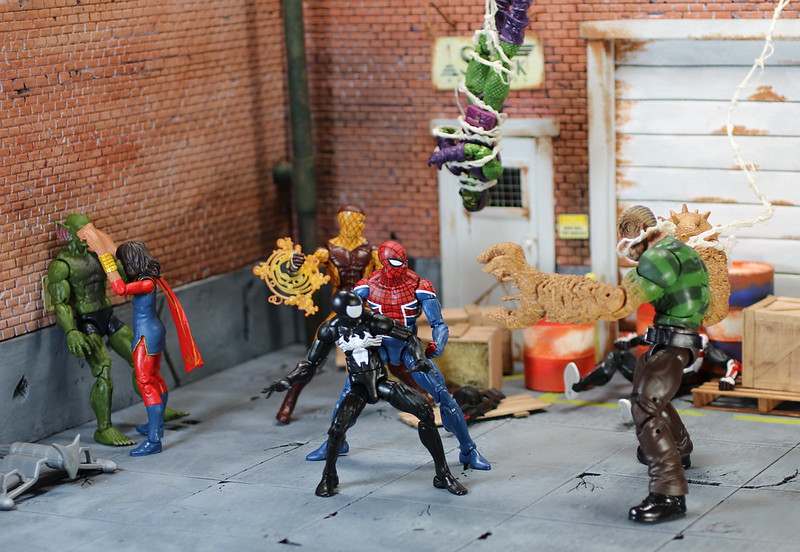 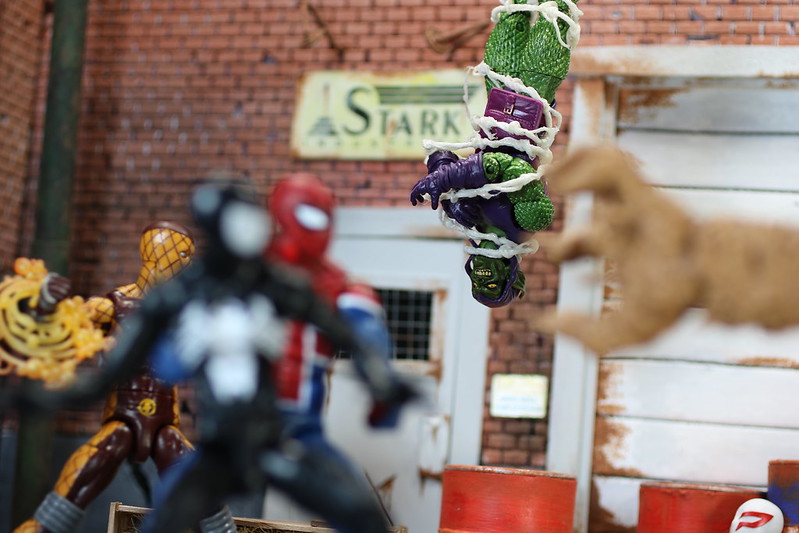 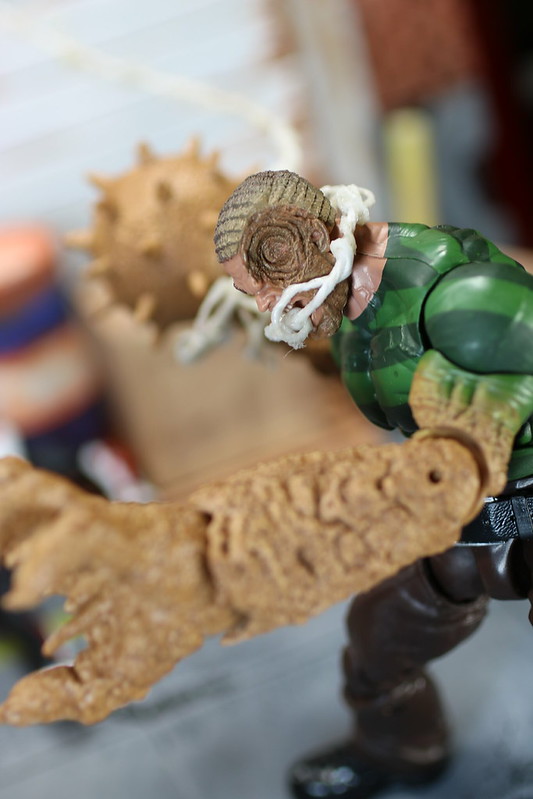