Director Krennic may not be the most anticipated or fun character to come out of the 6 inch Black Series, but he has a pretty major role in the formation of the Death Star, the main reason Rogue One will be taking place, and the reason for the Rebel Alliance to come together and ultimately create the original trilogy. So, he is pretty important. I am currently reading Catalyst, the novel that leads up to Rogue One, and Krennic is in it a whole lot. We really get a sense of who this guy is, and his motivations behind the Death Star.

In 6 inch scale he is pretty great. He is wearing a white tunic with black pants and a white cape. His outfit is very similar to the Imperial Officer’s outfit, but instead of the drab color, he went with the brighter white and black. And the addition of the cape. Who knows what that is all about? He is pretty egotistical, so it would be no surprise for him to create his own outfit that is more similar to that of the Grand Admiral.

He has really good articulation, as we are used to. The cape comes around the front, which does limit the movement, but I don’t think we are going to see him doing a whole lot of action in the movie.

When you remove the cape, you get full view of the uniform. The tunic is so white and clean, while the black pants stand apart, with their flared thighs.

On Krennic’s belt, he has a holster to hold his other accessory, a small gun. It is very well done. Good details, and a little extra paint applied to the handle.

The cape is actually really well done. I wish it was fabric like we have seen with some other Black Series 6 inch figures. It would have made movement better. Guess that is something for the customizers to work on. There are a lot of details in the cape with some designs stitched in there. 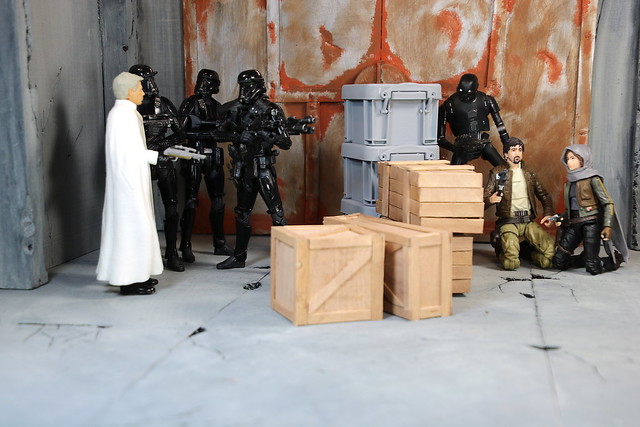 Krennic stands apart from the rest of the Rogue One series so far. We have had a lot of soldiers come our way. Now we get a politician, and a leader for all of the Death Troopers.

The timer is counting down. The movie will be upon us soon.