The Hovertank Pilot is just one more of the mass of new Stormtroopers coming out for the lead up to Rogue One. We are getting some really nice looks at the new characters, and the variations of the Stormtrooper are really well done.

The Hovertank Pilot is very similar to the upcoming Shoretrooper. They wear the same armor, with a different helmet. The two sets of troopers are going to be set in two different locations. The Shoretroopers will be on Scarif, while the Hovertank Pilots will be on Jedha.  One of the most deviating items with the new troopers from the original Stormtroopers is the lack of armor on the upper thighs. They are wearing more baggy type pants.

I like the sligthly off-white color of the outfit. Hasbro did a good job of adding some details to make them more used and dirty looking compared to the squeaky clean look we get from the Stormtroopers of ole’ and the super shiny Death Troopers. It is clear that these pilots are used to working hard in dirty places.  The articulation on the figure is pretty good. The new troopers have all lost the double joints in the elbows which is a bit of a shame. The look was a bit more dynamic with the extra bend. It is not a total loss as they probably have some trouble bending too far in their armor, but they will never be able to scratch their noses. 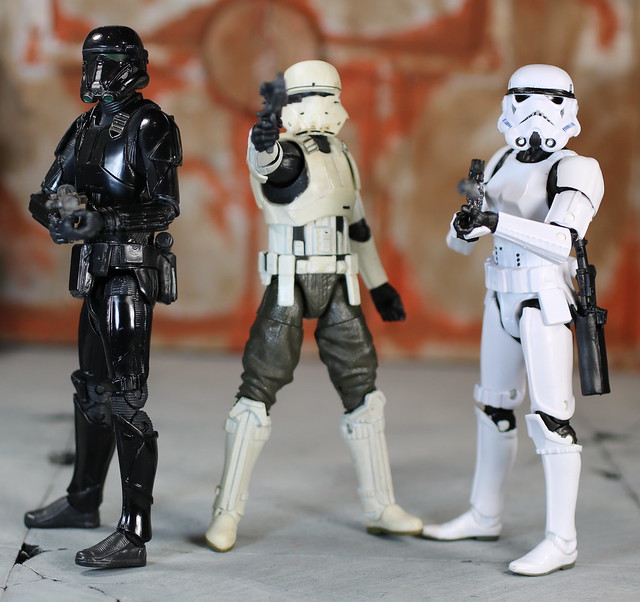 The Hovertank Pilot comes with a standard E-11 Blaster Rifle. It is not a big surprise that they would have a generic rifle that we see across the galaxy with the Stormtroopers. The only other variation I may have expected was a holdout blaster since I doubt a Hovertank Pilot has a lot of need for close combat weapons, unless they were making door to door sweeps, which looks to be quite possible in the small streets of Jedha.

The Hovertank Pilot instantly made me want to scratchbuild a Hovertank, but how big would that thing be in the 6 inch scale? It would be a massive vehicle to be sure. I will have to wait to see if I can get some better reference material on this one. It could make for a great diorama piece here in the future. Guess I gotta go get me a second Pilot.