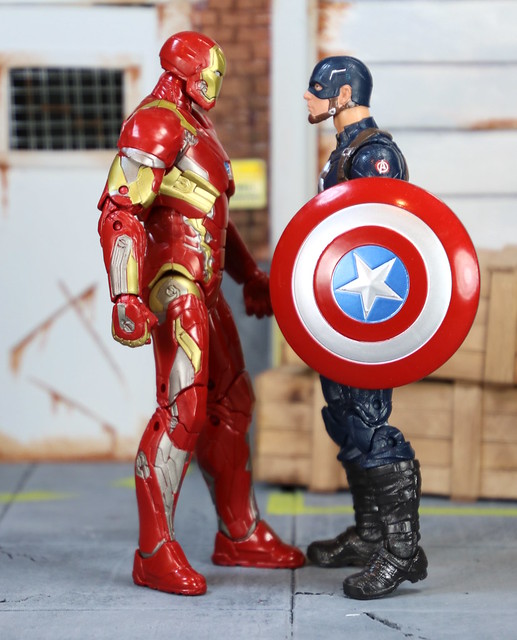 The Civil War movie was very polarizing for fans of Captain America and Iron Man. I was on team Cap, while my wife went for team Iron Man. We had a lot of fun poking one another during the movie as each made good points about their stand on all that brought about the Civil War.

His outfit is so very nicely detailed, from great molding to a really nice paint scheme. He is ready to battle with all of the articulation you expect from the Marvel Legends line. Hasbro has really gone for it, and has spread the great articulation through all of their lines of 6 inch figures. So much so that other companies have jumped onto the 6 inch bandwagon to capitalize on the ever growing 6 inch market.

Steve comes with his trademark shield. This one is the movie version. It has the straps on the back to be held on the arm only. There is no peg like the comic version to be attached to the back.

Iron Man is decked out in his Mark 46 suit this time around. He is looking good with the red and gold, and a bit of silver in there for good measure.  We have had a LOT of Iron Men over the years of Marvel Legends. Some great, some good, but the movie figures have the best details.

This version of Iron Man comes with open and closed hands. His open hands have a port to add repulsor beams that are beautifully painted in blue and white. They give a bit of extra detail to allow for more playability.

The only problem I have with the hands are the lack of movement at the wrists. If he is using the the repulosors as a weapon, he has a bit of a funny stance while firing them toward someone. 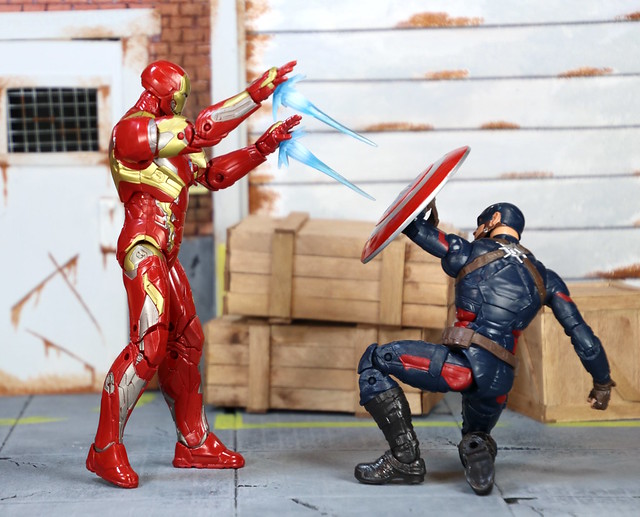 This is a great start to the Giant Man Series.  We get the main characters from the Civil War movie.   I was a but surprised at first that this wave was half Civil War, and half Comic.  Then I saw what they were up to.  This wave of 7 figures has been extended to add 8 more figures in exclusives and box sets.  That turns out to be a whole lot of figures under the Civil War branding.