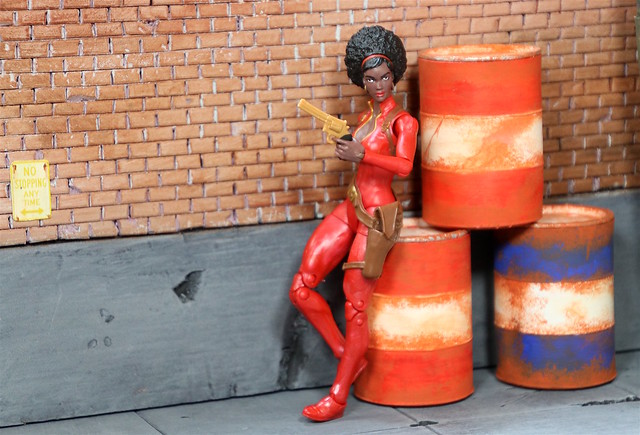 Misty Knight was my last holdout for the Rhino Series. There was a terrible production flaw with some wonky eyes, and she came with a second torso for Rhino. So it was pretty easy to pass on her, when the other figure was the outstanding Ghost Rider figure.

My local Toys R Us is closing soon, due to the company selling the land for a housing development. The Bay Area needs is another housing development like a hole in the head. Well, they put the entire store on “up to 50% off.” That means they took away all of the good merchandise and left mostly garbage or what they have a huge amount of at other stores.  Luckily for me, what they have a lot of at other stores is Marvel Legends, since they stockpiled the last two waves and really warmed those pegs. A nice 30% off and a huge amount of Misty’s sitting around, and I was able to find one with good eyes, and a discount to take the sting out of having an extra torso that I cannot use.

Misty is a really well done figure. She looks fantastic. Definitely a unique figure for the Marvel shelves. She has on a great looking jumpsuit with just a tough of yellow. She has a shoulder holster where it looks like she holds extra rounds, and a gun holster on her hip. She has her robotic right hand, which should be a right arm, but we will go with the hand. Of course one of the most stand-out parts of her outfit is the huge fro of hair behind her headband, and man does it look great! It does make her head top heavy sticking out back there.

This time period is about the best time for her to be out. She is friends with Daredevil, Luke Cage, and Iron Fist, all future and current Netflix shows. Might we see her in the flesh? Not to mention she was a part of Heroes for Hire and the Fearless Defenders, so we could see her when Netflix gets around to producing The Defenders after their run of current Marvel shows. Add in that she was in the Fearless Defenders with Valkyrie, who was in the most recent wave of Marvel Legends, and I am surprised that she is still in the stores at all. 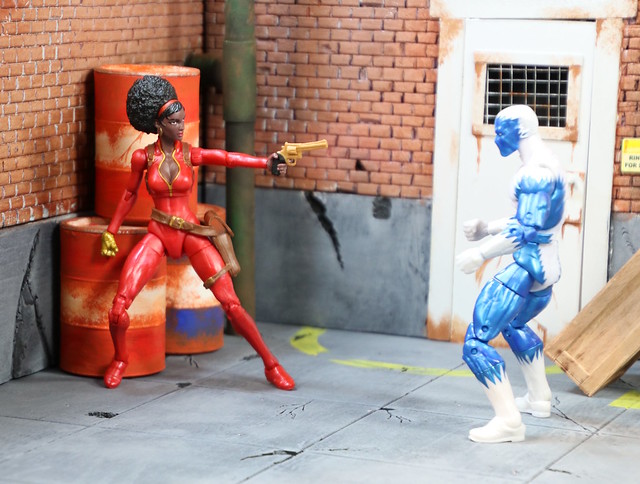