This was an amazingly fast turn around from show to toys. The show aired on TV probably one week before I saw these in the stores. I still haven’t seen them again in the week since, but I am sure they will be making a comeback.

I loved this episode. If for nothing else than the fact that the Turtles are finally getting their acts together and getting prepared to get off of the farm and back to New York.

I was very excited to see they were made these figures. They looked so cool in the show. Well, there are some short comings to each figure and it has pushed me to want/need to try my hand at customizing. It has been many moons since my model car days, but but I am ready for the challenge. I want them to look as good as the show.

Donnie might be the best prepared figure of the four.   He comes with his giant axe that he uses to bring down a mountain.  He also comes with a sledge hammer and a rope.  I assume the sledge hammer is supposed to represent the large hammers the foot soldiers used to try to bring rocks down on Donnie’s head.  Well, close but no cigar.  The hammers they used were much more crude and rudimentary.  He was never actually seen “climbing” the mountain, but I guess that is what the rope is supposed to represent.

I went back to the show to grab some reference photos the fastest way I knew how… camera phone.  The main details of Donatello are there.  There are just a few changes needed.  The colors are too bright on all of the purple.  He is missing a bunch of detail colors on his wraps as well, but at least they are all there.

Ever since waking up at the farm, Leonardo seems to have a thing for the bow and arrow.  I was so happy to see that they actually went ahead and moved his swords to his hip as they were in the show.  They are gigantic though.  They seem way out of proportion.  His bow looks pretty good.  Maybe something can be done about both of them. 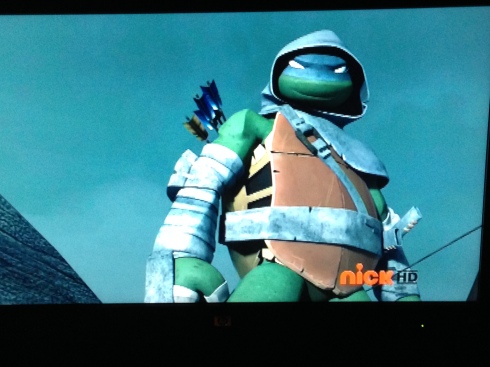 He has got all kinds of stuff wrong with his coloring.  What is up with the blue pads and belts?  Ah well, we will work on that.   And look at his sheaths on his left hip.  Those are pretty skinny and allow his arms to fall to his side.   I think I am definitely going to have to do something about that.  And it looks like the last part is the quiver on his back.  He can’t fight with only one arrow.

The head sculpt on Mikey is killing me.  He has such a chubby little face.  And smiling?  No, no, no!  This was not a time of smiling.  He has all of his wood bark armor, which is a great start.   He also has both of his kamas that he used so well in his spirit fight.  He was pretty hard core.

Overall his coloring is pretty good.  The orange is a bit bright in his head.  In the show it was much more of a peach color.  Something also has to be done with his pads.  And his Kamas need to be recolored as well.

Raphael might be the roughest of all.  He is going to take the most work to get into fighting shape.   Thankfully, once again all of the main details are there.  First off, he has a giant red thing around his neck.  I don’t know what the flat brain substance is, but it is NOT on his costume in the show.  That has to go.   He also has a flame thrower that doesn’t exist.   They gave him wraps around his arms that hold the tubes the flames came out of.  He never held anything like that in his hand.  Speaking of holding things in his hand, the Tegaki is terrible!  The main shape is sound, but it is made of rubber, and it is near impossible to get straight in his hand.  Besides that fact, he only came with one.  He needs two, so it will be easy enough to make two new ones as it would be to try to match the one that is already made.

There is also some work to be done with the fuel packs on his back.  They will need at least some paint, if not also some details.   Tubes will have to be made to go from the tanks to his wrist launchers.  One high point is that he came with a belt that has loops for his sais.  Now all he needs is a pair of sais that will fit in there.  I think that was a nice touch, since it seems Raph loves/needs his sais at all times.

Well, there you have it.  Four new Turtles.  They are a great starting point.  They look really good overall.  I would generally be happy with just putting them on my shelf, but I have that nagging feeling that they could be better.  So they are going to be my test subjects to see how well/if I can get them up to par.  Here goes nothing!

One response to “Mystic Turtles – from Season 3, Episode 8 – Vision Quest”